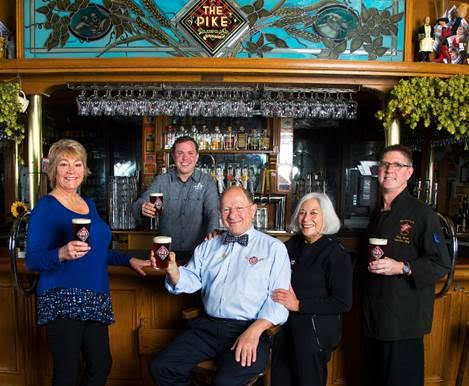 In the modern craft beer world, where mergers and acquisitions are becoming more and more common, it is refreshing to share a story about a beloved local brewery NOT selling out, but selling IN. Pike Brewing Company, a Seattle beer institution, just announced that it is adding to its ownership team as it looks to the future, bringing three long-term employees on board as owners.

PIKE SELLS IN AND MOVES UP

Today, on the eve of our 26th anniversary, we’re excited to announce that we’re ensuring that Pike Brewing remains an independent and local company by expanding ownership to three key employees plus expanding our footprint right here in Seattle.

We are proud to announce that we’ve expanded ownership of The Pike Brewing Company to include three key and long term employees. Each individual has helped us build the company. They are Drew Gillespie, Vice President Operations; Patti Baker, Vice President Controller; and Gary Marx, Executive Chef.  Collectively they have been at Pike for 45 years and we have long considered them as family in this family owned brewery. Each one has taken on key projects and responsibilities, showing the same commitment to Pike as we do. By formalizing them as owners alongside us we are ensuring that Pike Brewing remains independent and continues to grow organically.

Speaking of organic growth, we are also happy to announce that we are expanding our footprint and brewing capacity by moving up. We will occupy an additional 5,500 square feet space directly above The Pike Pub on the atrium level with direct access from First Avenue and The Pike Place Market Atrium. The entire space will be remodeled in the Pike style with antique breweriana, an extension of Pike’s Micro Brewery Museum.

If we could update Germany’s Reinheitsgebot, beer purity law, for these times we’d add independence as a fifth ingredient, right alongside malt, water, hops and yeast.  At Pike Brewing, our management team decides what to brew based on quality, taste and sustainability, not dictated from outside sources! When we founded the brewery in 1989 we dared to dream that our creativity and investment would establish a brewing company that would endure in perpetuity. Our role models were the storied European breweries that we represented as sole U.S. agents. Now, 26 years later, that dream has taken another step towards becoming a reality.

When we began our craft beer journey in 1978, the whole of America had only two craft breweries. Currently there are almost 4,000!   No matter the landscape, in almost 40 years in beer, we have never been so excited about our company’s momentum and growth potential. We love our work at Pike Brewing, our new partners: Drew, Patti and Gary; and our team of dedicated brewers, bottlers, warehouse people, sales and marketing professionals, cooks, managers, servers and front-of-the-house staff! We are ecstatic about spending the remainder of our careers as a part of this team.

The Pike Brewing Company was founded in 1989 by craft beer and wine pioneers, Charles and Rose Ann Finkel. Starting with a four barrel copper gravity flow brew house, demand exceeded supply from the very beginning and the brewery moved to its current home in 1996, adding the The Pike Pub. In 1997 their larger beer importing company, including the burgeoning brewery, was sold and the Finkels took a sabbatical. Missing their little baby, Charles and Rose Ann re-acquired Pike Brewing in 2006.

Now, 26 years after its founding, Pike Brewing continues to handcraft its beers under the tutelage of Charles and Rose Ann. As hundreds of new brewers have entered the scene and the largest brewers are either offering their own “crafty beers” or buying up independent brewers, Pike Brewing Company is formalizing its commitment to stay independent and local by expanding ownership to include three key employees.

In addition to the Finkel Family, the new owners are Drew Gillespie, Vice President Operations; Patti Baker, Vice President Controller; and Gary Marx, Executive Chef.  Drew, who has deep roots in Washington’s Okanagan valley, began as a line-cook in The Pike Pub’s kitchen in 1998 and has held more positions than anyone else at Pike. These include bartender, general manager and currently vice president operations.  Patti, born in Oak Park, IL and raised in Stanwood, WA was hired in 2006 as a bookkeeper and office manager. It soon became clear that she had the organizational and financial skills to lead all of Pike Brewing’s finances and human resources. She was promoted to Vice President Controller in January 2015. Chef Gary Marx, from Auburn, WA has been at the helm of The Pike Pub’s kitchen since shortly after it opened in 1996. He has built a culture in Pike’s kitchen that seeks out local and sustainable ingredients for its menu. Under his leadership The Pike Pub has been consistently recognized as a prime dining spot for locals and visitors alike.

Moving up, Pike Brewing will occupy an additional 5,500 square feet space directly above The Pike Pub with a dedicated entrance on First Avenue and direct access from The Pike Place Market. Construction on the expanded space will begin in late 2015 with an estimated completion in the spring of 2016. Current plans for the space include six additional 60 barrel fermenters, a new bright tank and an exciting restaurant concept. This expansion will allow the brewery to meet the primary goal of supplying an ever-increasing demand from customers in the Pacific Northwest at the same time allowing Pike’s talented brewers to introduce more new beers of different styles.