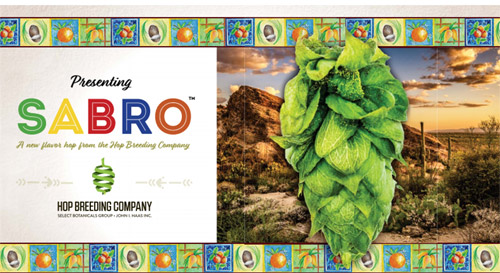 As IPA continues to grow in popularity, so does the public’s interest in hops, perhaps the most important ingredient in IPA. Today, for the first time in the nearly ten-year history of this blog, I’m sharing news about a new hop variety: Sabro™. Hop heads should keep an eye out for beers brewed with Sabro hops, a.k.a. HBC 438. This hop has a pretty cool backstory, one that is rooted in the mountains of New  Mexico.

The Hop Breeding Company (HBC), based in the Yakima Valley, is a group that develops new hop varieties. Basically, a group of really smart farmers and scientists who practice hop husbandry. That’s who just announced the introduction of this new hop. (Want to know more about all this hop stuff, see the article I included at the bottom of the story.)

Haas Innovations Brewery is the beer-making branch of John I. Haas, Inc., one of the hop producers involved in Hop Breeding Company. The brewery is described as Haas’ very own brewing and research facility, with a primary purpose of trying out new recipes, new products, and new hops, including new hop varieties bred by the HBC, in a totally controllable, repeatable, and creative environment. Pro tip: Cowiche Canyon Kitchen and Icehouse (a restaurant and bar in Yakima) often features beers from Haas Innovations Brewery. It’s pretty rare to see those beers on tap anywhere else. If one of Haas’ beers is on tap, it’s probably brewed with an experimental hop.

More geeky stuff. Most every hop that you know and love is of European descent. Though they have been grown here, in some cases for over a century, they did not originate here. That is, they’re derived from European hops. They may have been developed and bred here, but their ancestors are not native. Neomexicanus is a genetically distinct sub-species of the hop family that has been growing wild in the mountains of New Mexico for the past million years. The official name of the sub-species is humulus lupulus var. neomexicanus.

Sabro is a strongly expressive hop that translates its flavor incredibly well into beer, according to Virgil McDonald, Brewmaster at the Haas Innovations Brewery. “It gives a robust brewing performance with a versatility that lends itself to many styles, particularly hop-forward beers.”

According to the press release about this new hop, Sabro’s exceptional flavor profile has its roots in its H. lupulus var. neomexicanus heritage. Indigenous to the American Southwest, the neomexicanus “wild hops” can be difficult to breed. However, HBC’s advanced breeding program, led by breeders Jason Perrault of Select Botanicals Group and Michael Ferguson of John I. Haas, successfully harnessed the properties of the neomexicanus heritage to create this new hop variety with an incredibly unique aroma and flavor profile.

“Sabro HBC 438 is the culmination of a two-decade-long breeding effort aimed at combining the uniqueness of neomexicanus genetics into a background with good agronomics and exceptional brewing qualities,” says Perrault. “It was a long process, but the results speak for themselves.”

Alex Barth, CEO of John I. Haas, agrees, “Aside from its wonderfully complex and unique flavor profile, we also love the fact that this new hop is more genetically diverse. If part of your heritage includes the desert and mountain environments of the Southwestern US, you have a strong survival spirit in your genes – the essence of sustainability.”

Sabro joins other HBC proprietary varieties Citra® brand HBC 394, Mosaic® brand HBC 369, Ekuanot™ brand HBC 366, and Loral® brand HBC 291. Mike Smith of Loftus Ranches and Select Botanicals Group says, “Together, Citra and Mosaic comprise almost 15% of hop acreage in the US. Brewers love using these hops for their consistency, high quality, and distinct flavor profiles. We at the HBC truly believe that Sabro will quickly become another brewer favorite, from the smallest local brewpubs to the large national brands.”

Beers brewed with Sabro can be sampled at the Craft Brewers Conference in Nashville next week, at both the John I. Haas booth #1112 and the Yakima Chief-Hopunion booth #824.

Here is an article I wrote for Sip Northwest magazine about hops and hop breeding that lends more insight into the fascinating world of hops.