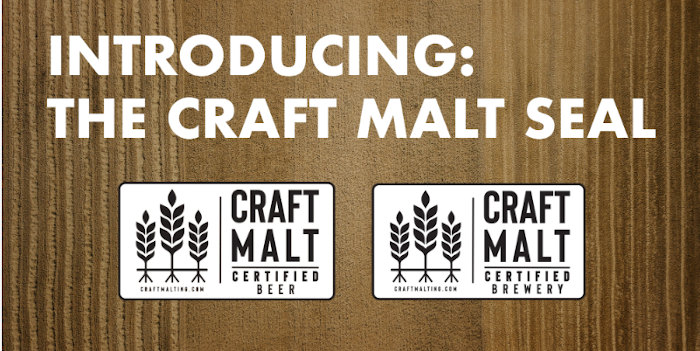 For most craft beer fans, words like sustainable, local, independent, and small matter and help direct buying decisions. A couple years ago the Brewers Association introduced the Independent Beer Seal to help beer consumers identify beers brewed by independent, craft breweries. Now the Craft Maltsters Guild introduces a seal of its own: the Craft Malt Seal. The seal helps consumers identify breweries and distilleries that use a specified portion of malt from small producers.

Why should you care about the Craft Malt Seal? If you rewind the beer world’s clock a decade, things were a lot different. Yeah, that’s an understatement. For instance, there was no such thing as craft malt. If companies producing small-batch malted barley existed at all, few people knew about it. As recently as 2015, the concept was still so new that it warranted an article in Seattle magazine, which I was happy to pen. (Read that article here PDF.) That article provides a more robust description of small-batch barley.

The rise of craft malt is a pretty exciting development in the world of craft beer. It’s helped introduce a wider variety of barley and, hence, a wider variety of flavor options for brewers. As explained in the article linked above, one of the companies that drove this shift in the world of barley is Skagit Valley Malting of Burlington, Washington. They devised a method for malting smaller batches of barley in a way that was effective, efficient, and economical. It was a game-changer.

Here is a quick press release from Skagit Valley Malting announcing the advent of the Craft Malt Seal.

As a part of the Craft Maltsters Guild, Skagit Valley Malting is launching efforts to get customers certified to use the Craft Malt Seal.

Criteria for breweries, distilleries, beers, and distilled products are all the same – if you are a member of the Craft Maltsters Guild and use more than 10% of your grain by weight from a craft maltster, you qualify to use the seal!

By using the Craft Malt Seal on packages, in taprooms, and in marketing materials, breweries and distilleries can showcase their support for local and sustainable grain economies.

The seal is a perfect way to educate customers about the sourcing of ingredients in the products they consume. You’re brewing a craft product, showcase your support of those ingredients all the way through.