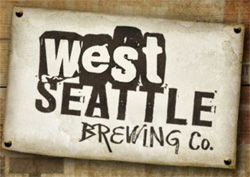 Kevin Fawcett knows everybody. A longtime home brewer, he is a familiar face at Larry’s Brewing Supply in Kent, where he is a regular customer and has even taught homebrewing classes. He is also a longtime member of local homebrew clubs like the Impaling Alers. Kevin was also a writer for Northwest Brewing News back when that publication was just getting off the ground. On top of that, he is a contractor who has worked with local breweries, helping others bring their brewery dreams to life. Most recently, he helped Airways Brewing install its new brewhouse. Yep, Kevin has been around the beer business for a long time and pretty much knows everyone.

Now, Kevin is one of the owners at West Seattle Brewing. (Follow them on Facebook.) The company is awaiting the final approval from the TTB (Alcohol and Tobacco Tax and Trade Bureau) and West Seattle Brewing will be 100 percent legal. That all-important letter from the federal government could arrive in the mail any day. In the meantime, I stopped by the brewery at the corner of Fauntleroy Way SW and SW 36th Street yesterday and chatted with Kevin about his plans.

The space still looks rough, though you can see the potential. The space is being converted into a brewery and taproom. Constructed in the 1920s, the building was originally an auto showroom. Most recently it was a mini-mart. There is still a lot of work to do before a public opening. The first order of business, they demolished the ugly, dropped ceiling and exposed the original, old-growth beams and 15 foot-high ceilings.

Like most mini-marts, one wall is a walk-in cooler with glass doors. The cooler is a valuable asset for a brewery. The cooler doors will be modified: there is no sense in having all of those doors on the front. Kevin tells me that they will still be glass, exposing what will eventually be the serving tanks.

West Seattle Brewing plans to serve beer but not food. Next door, Jones Barbeque serves up delicious, award-winning barbecue. Kitty-corner, Buddha Ruksa serves up wildly popular Thai food that attracts foodies from across the city. (Can you say, Pliny the Thai Food?) Beyond that, there are plenty of nearby food options.

West Seattle Brewing will start out by brewing on Kevin’s overgrown homebrewing system—basically, a nano-brewery system. The plan is to grow almost immediately. He tells me that he is not yet certain what size brewhouse and tanks they will install. Something like a three-barrel system sounds likely, but he also mentioned a real possibility of going larger, speaking of a ten-barrel system that lies in waiting.

In addition to hordes of thirsty West Seattleites, a local Irish pub is awaiting Kevin’s beers. There is already a relationship between the two businesses and chances are West Seattle Brewing will provide at least a couple of house beers for A Terrible Beauty, which currently has restaurants in Renton and West Seattle. Rumor has it the company is looking to open a third location soon. A Terrible Beauty differentiates itself from other Irish pubs by featuring a thoughtful selection of good beer—meaning, they offer more than Guinness, Harp, Smithwick’s and the usual suspects. Both the Renton and West Seattle locations have 20+ taps pouring mostly local craft beers.

When West Seattle Brewing opens its taproom, it is going to be wildly popular with the neighborhood. As a longtime West Seattleite, I can guarantee it. How much of the company’s beer will make it across the bridge? We will have to wait and see.