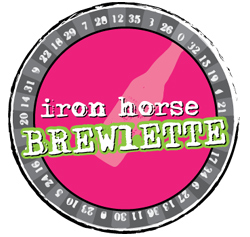 The brewery will soon announce plans to introduce Iron Horse Brewlette, a limited-release series of beers that will be rather mysterious in nature. With the release of each beer in the Brewlett series, the beer retailers, the beer consumers, and even Iron Horse’s own employees will have no idea what they are drinking until they pour it and take a sip.

“We wanted to reinvigorate the ‘new beer’ drinking experience,” said Owner and General Manager, Greg Parker. “Finding and trying interesting, new beers is what drives the craft beer drinker. We see this type of beer exploration all the time in our pub. People come in, try something new, and then ‘check in’ to brag about what that experience was like. We thought we could take that concept and turn it into an entire beer series. There is a 67% chance that this is a bad idea, which is why it is appealing to us.”

Iron Horse Brewlette is a yearlong series of beers with releases scheduled quarterly for February, May, September, and November. For each release, Iron Horse Brewery plans to produce three beer styles at a time: big and hoppy, big and malty, big and balanced. They will be shipped to the market without labels. You must drink the beer to find out what it is.

Get it? Not roulette, but brewlette.

Why do I have thoughts of a young Christopher Walken and The Deer Hunter in my head right now? “Mao! Ditty Mao!”

In conjunction with the introduction of the Brewlette series, Iron Horse Brewery is developing a mobile web app to ensure that the Brewlette experience is fulfilling both on and off-line.

According to Jared Vallejo, Director of Marketing at Iron Horse Brewery, “The web app will allow series participants to identify and share within their social media networks, where and what beer was found. Participants can check in, guess what’s in the beer, share their findings and enter to win Iron Horse Brewery swag and prizes, including a private brewery tour. Also, does anyone know how to do what I just said, because that seems hard.”

Cowboy Ross Charstrom, Vice President of Sales, also chimed in, “This is a great opportunity for tap houses to attract new customers. The availability of the beer is limited so that Iron Horse Brewlette fans will have to look outside of their local watering holes in order to find the Brewlette beers each quarter. Not only do craft beer lovers get to try new and interesting beers, they get to try new and interesting tap houses as well; most likely becoming repeat customers or regulars.”

For more information about Iron Horse Brewlette go to http://www.ironhorsebrewlette.com.