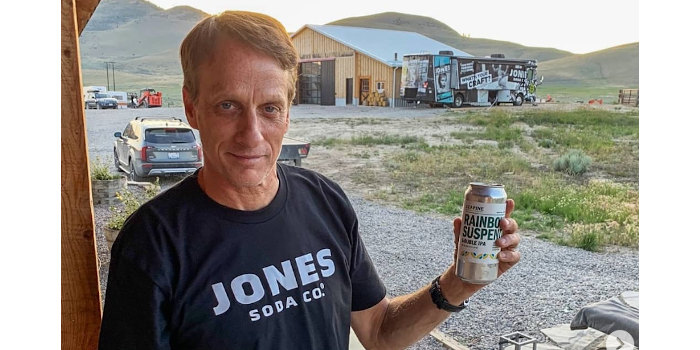 Exactly how did the best-known skateboarder of all time end up drinking a beer from one of Seattle’s local breweries?  (Above: from Instagram, Tony Hawk enjoys a can of Rainbow Suspenders Double IPA from Seapine Brewing.) We aren’t exactly sure, but it would seem Jones Soda, another local Seattle company, had something to do with it.

Whatever the case, Seapine Brewing has recently expanded its footprint across the nation, so wherever Tony Hawk might be, he can now get his hands on more Rainbow Suspenders.

Like all local breweries, for Seapine Brewing the pandemic created challenges and required the brewery to make lemonade out of lemons. As it did for other local breweries, Seapine Brewing’s pivot included Tavour, the local company that specializes in shipping craft beer across the nation. Previously a draft only, hyper-local product, Seapine began canning its beer in response to the pandemic and then reach out to Tavour to spread the love.

Below we share a story from Tavour about how other breweries across the nation are weathering the COVID storm.

It’s been a rough few months for American craft brewers who entered 2020 riding high. The 2010s were a decade of great success that began with under 2,000 breweries and concluded with well over 8,000! Then Coronavirus hit, and mandatory closures of bars, taprooms, and restaurants across the nation plunged the industry into a panic.

On April 7, the Brewers Association reported that the average brewery saw sales drop by a staggering 75%. Though numbers remained low at 50%, another assessment on May 29 reported that, “a majority of breweries remain confident their business will survive 2020.” Between 15-20% were still unsure.

Now in July, halfway through the year, sales continue to fluctuate as some states (like California) are once again mandated to close down bars and restaurants with restrictions similar to those early in the pandemic. Breweries like San Diego’s Modern Times have been forced to put employees on furlough as a result, while others, like Gorilla Alchemy in Colorado, have shuttered permanently.

Yet many other breweries continue on, adapting to the ongoing economic crisis — and modern technology.

For brewer Brendan Gough of Liquid Gravity Brewing, the key to survival has proven to be letting go of his draft-only business model and switching to cans. Gough launched Liquid Gravity in January with a neighborhood taproom in San Luis Obispo, CA, and plans to keep things local. Now, Gough says he’s managed to stay afloat by selling cans of his creations to shops around California and, unexpectedly, going national through online beer retailer, Tavour.

Gough is not alone. With taprooms and restaurants either closed or operating at limited capacities, craft brewers all over the country are altering their business models and jumping into relatively novel solutions like curbside pickup, to-go orders, and perhaps, most significantly, online sales. They have to — before the pandemic, craft breweries were accustomed to 40% or more of their revenue from draft sales, the Brewers Association’s Chief Economist Bart Watson says.

Now, online shopping has become the norm for many Americans, including shopping for beer. According to June-collected Nielsen data, online alcohol sales are currently three times higher than they were a year ago. It makes sense — online shopping means automatic social distancing, and apps like Tavour give consumers the opportunity to try beers they wouldn’t normally have access to locally.

Seattle’s Seapine Brewing began selling their beer outside of Washington state for the first time in June, through Tavour. Before the pandemic, they were draft-only. On the opposite coast, Icarus Brewing sent its beer across state lines for the first time in July. Likewise, a rep from Virginia’s Aslin Beer Co. said the brewery had planned to do “very little canning” in 2020 but has now switched over almost exclusively to cans in order to reach more customers.

Some brewers have also found opportunity in current trends like hard seltzer, which bloomed into a billion-dollar business last year (according to Nielsen data). New York’s Evil Twin Brewing even launched a “Pastry Seltzer” series called Evil Water, which features ingredients like marshmallows, salted caramel, and Coca-Cola. On July 2, Hop Culture named it “the Hard Seltzer of the Summer.”

Meanwhile, the Brewers Association is turning to political advocacy. This week, craft brewers guilds from 47 states are holding online meetings with Congress to discuss the Craft Beverage Modernization and Tax Reform Act. Their goal is to secure additional resources to help small and independent breweries withstand the ongoing health and economic crisis.

Fremont Brewing set to release this year's version of The Rusty Nail
Ales for ALS annual brewfest on Saturday, August 22nd
Like many other breweries, Chuckanut Brewery is counting calories