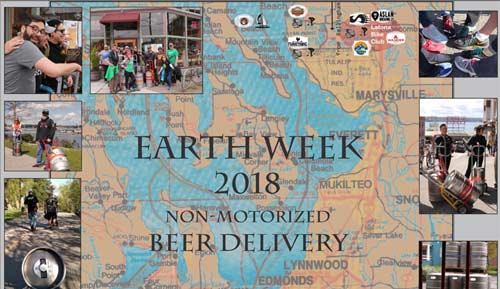 Earth Week at Latona Pub in Seattle. It’s one of my favorite stories to share every year. For six years Latona Pub has celebrated Earth Day with a variety of keg walking and sponsorship events.  The goal of the celebration is to raise awareness of the environment, both urban and natural, and draw attention to how our actions impact the planet. In doing so, they help some fantastic organizations that work on environmental issues.

It’s a multi-day celebration surrounding Earth Day (April 22). For about a week, Latona Pub pours nothing but people-powered beers. From near and far breweries deliver beer to Latona Pub using non-motorized means. Bikes, boats, hand trucks, dollies, whatever it takes to transport a keg via human-power. This year kegs came in via bicycle from as far away as Deming, Bellingham, and Arlington. A lot of other beers made shorter treks.

On Saturday, April 14th, a day of epic rainfall in Seattle, the Latona crew walked kegs across the entire city of Seattle, enduring the weather for the cause. That one walk alone was from Georgetown Brewing in South Seattle all the way to the Latona Pub near Green Lake, with stops at Jellyfish Brewing (Georgetown), Seapine Brewing (SoDo), Pike Brewing (Downtown), and Floating Bridge Brewing (U-District). On Sunday the 15th, they walked kegs from Lantern Brewing, Naked City Brewery, Flying Bike Brewing, and Big Time Brewery. Finally, on the 19th they’ll be trekking through Ballard with our friends from Urban Family Brewing, Reuben’s Brews, Stoup Brewing, Hales Ale Brewery, and Maritime Pacific Brewing.

According to the pub, “We live in a unique place where world class beer is merely a walk, a sail, or a cycle trip away from a plethora of diverse and innovative breweries.”

Wednesday, April 18th – Join Latona Pub for a benefit for Feet First, an organization dedicated to promoting a safe pedestrian experience in Seattle. In the spirit of Earth Week, they’ll help walk kegs from the Ballard area to the Latona. Starting at 7 PM, the pub hosts a live auction to benefit Feet First, along with live Rhumba music by guitarist Leif Totusek.

Also that day, they’ll be tapping some of the specialty kegs from Aslan Brewing Company, Skookum Brewery, Wander Brewing, and The North Fork Brewery and Beer Shrine that came in via bicycle by the Latona Club, a group comprised of Latona bartenders and their fellow bike enthusiasts.

Saturday, April 21st  – At 7:00 PM join Latona Pub for an Earth Day celebration benefiting Brewshed Alliance, an organization that works to protect the wild waterways and watersheds that are so essential to producing the beers we love. 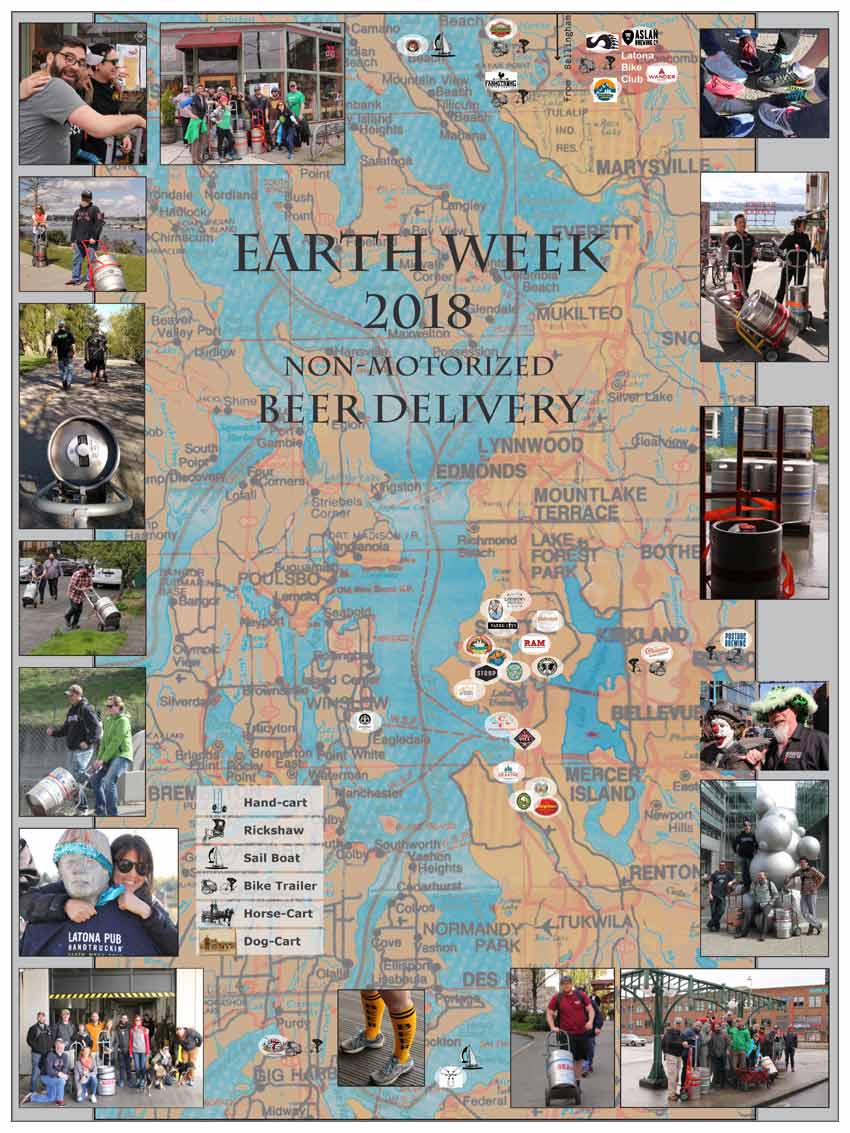