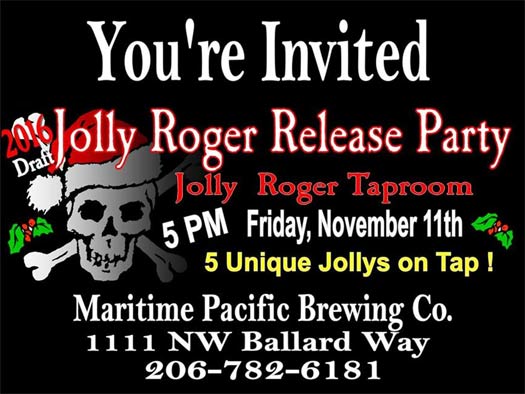 For beer drinkers around Seattle there is no better sign that winter is coming than the annual release of Jolly Roger Christmas Ale from Maritime Pacific Brewing. You are invited to a special party this Friday at the brewery that features five different versions of the beer, including one new addition the family. Here’s the word from the brewery.

“We all know Jolly Roger is already out in bottles at many local stores and markets but draft has yet to hit the streets. This Friday, November 11th, marks the release of Jolly Roger on Draft for 2016. This date is significant in more than one way. Not only is it Veteran’s Day but it also just happens to represent the address of where Jolly is brewed, 1111 NW Ballard Way. Maritime has been brewing Jolly Roger in Ballard since 1992 and it still remains many beer drinkers’ favorite holiday ale.”

“The Jolly Roger Taproom will be tapping the first Keg of 2016 Jolly at 5 PM. This year’s Jolly will be flowing in several unique variations:  Rum Oak Aged Jolly, Bourbon Barrel Jolly, Cherries and Brandy Jolly and Cask Conditioned with a Firkin on the Bar. 2015 Jolly will also be pouring for those who like to compare.”

“We are also introducing a New Member of the Jolly family, BLACK JOLLY, a roasty rich cousin of Jolly Roger. The evening will be fun with $1 off pints to all Military and Veterans showing proper ID along with special Jolly food Items prepared in our kitchen.   A drawing for Jolly door prizes will commence at 7pm so come early to get a seat. Please remember these unique Jolly variations are only on for this one night so if you miss this special Jolly event you may have go without for another year!”