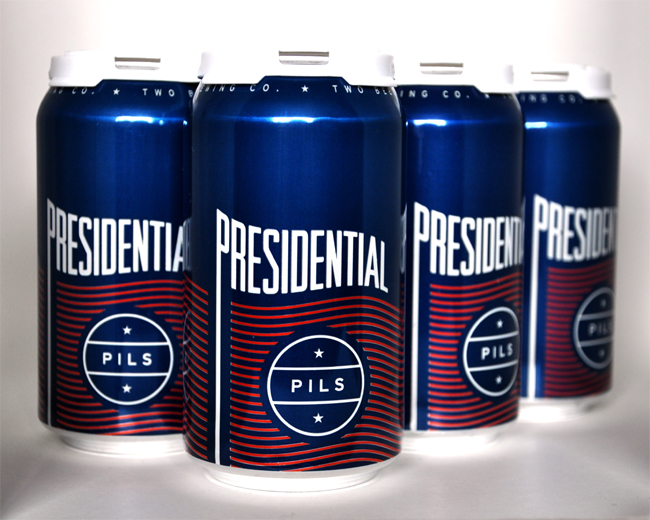 Just in time for your July 4th celebrations, Two Beers Brewing (blog sponsor) announced today that it has released a real American beer in a red, white and blue can. The Presidential Pils is described as a Czech-style Pilsner. It weighs in at 4.8 percent ABV and is brewed using 100 percent Pilsner malt, a Czech Pils yeast strain, and Saaz and Perle hops. Czech ingredients, but everything else is pure America. The press release is below.

It’s one of my favorite sayings when I’m roasting Anheuser-Busch for being a non-American multinational corporation: “The only thing red, white and blue about Budweiser is the can.” This year at the company picnic, show those Bud drinker that you support America. Show them that you are proud to be an American. That’s why you drink real American beer, brewed by an American company that doesn’t ship its profits overseas.

The beer is available in 12-ounce cans. Find it at The Woods tasting room, as well as better beer retailers around the area (details below).

Here’s the press release about this limited-release beer:

SEATTLE (June 25, 2013) – This summer, fire up the grill and break out the latest release from Two Beers Brewing! Hitting shelves this week throughout the Seattle area, Two Beers Brewing’s Presidential Pils – a slightly hoppy Czech-style Pilsner – is the perfect pick for your warm weather festivities. Easy to spot with its bright blue exterior and American flag design, these limited edition cans will add a spark to any hike, camping trip, day on the boat or Independence Day celebration.

“Warmer weather and outdoor activities call for a refreshing, easy drinking beer,” said Joel VandenBrink, founder and head brewer of Two Beers Brewing Co. “The problem is, there aren’t many local Pilsners available in cans. That’s where the Presidential Pils comes in. Whether you’re on the lake, watching the fireworks or barbecuing in the backyard, it’s the perfect pairing.”

An uncommon style to be brewed in the Pacific Northwest, the Presidential Pils is a Czech-style Pilsner featuring a 4.8 percent ABV. Brewed using 100 percent Pilsner malt and Czech Pils yeast strain, this sessionable Pilsner offers notes of spice and grass, thanks to the Saaz and Perle hops used to create it.

Available only in 12-ounce cans, Presidential Pils will be available at The Woods tasting room, as well as a variety of local specialty and grocery stores throughout the Seattle-Bellevue area, including Whole Foods Westlake, QFC and specialty bottle shops throughout the greater Seattle area. Pick up a six-pack of this limited edition brew for your cooler now through early August.