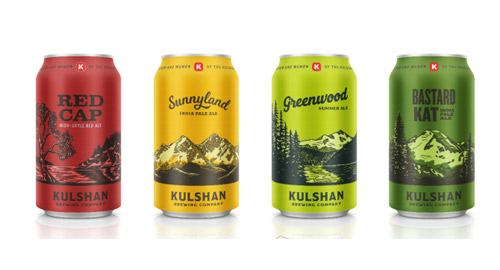 You don’t drink with your eyes. That’s not necessarily true. If it were, nobody would drink hazy IPAs, but that’s a different subject. To a certain extent, and with few exceptions, what you see influences what you drink. More importantly for the bottom line, what you see influences what you buy. That’s why a brewery’s brand is so important. Bellingham’s Kulshan Brewing just announced that it is introducing all new branding. Same great beer, but a whole new look.

Kulshan Brewing celebrates the release of the new look with a party at the brewery in the Roosevelt neighborhood (AKA the K2) this Thursday, July 19th from 5:00 – 9:00. More details about all of this, and how to reserve you spot at Thursday’s event, in the press release below.

KULSHAN BREWS UP A NEW LOOK

Since opening their doors in 2012, Kulshan Brewing Company has been brewing true-to-style, award-winning ales and lagers in Bellingham, WA with great success. Just a few short years after opening their Sunnyland neighborhood location, they opened a 30-barrel production brewery in response to an overwhelming demand for more beer. But with growing competition in a thriving craft beer community, they recognized it was time to throw the same passion and energy into the brand and messaging as they had been devoting to the beer.

In the summer of 2017, Kulshan took the plunge and invested in a marketing team including two newly created positions: Brand Manager and Media & Events. Along with contract designer, Cameron Jennings, the team set out to review, revise and refresh the Kulshan Brand to more accurately represent the quality of beer, community presence and culture the brewery was known for.

The goal of this rebrand was two-fold: Align the Kulshan brand with its surrounding community and natural environment with a timeless execution and introduce their year-round beer cans to recyclable cardboard cartons. Along with the logo, Bastard Kat IPA, Sunnyland IPA, Red Cap Ale, and Greenwood Summer Ale cans were all completely revamped. Kulshan enlisted local artist Sarah Finger, of Skyline Printworks to hand-carve and print each can and carton’s artwork featuring scenic views of local environs: Mt. Baker, the Salish Sea, Baker Lake, the Twin Sisters and Mt Shuksan.

The redesigned logo and website brings a new sophistication and grown-up feel to the brewery. “The new visual has many of the same elements as the original logo but with a refined and timeless aesthetic. We’re not the new kids on the block – we’ve been around a while now – and we wanted to ensure that we didn’t abandon our loyal, local following with something too trendy or flashy. Yet with the Seattle market in our sights, it also needed to feel contemporary, classic and cool. I think we accomplished that with a simplified execution of the logo, expanded brand kit and updated color palette,” said Megan Bailey, brand manager for Kulshan Brewing.

Join the Kulshan team on Thursday, July 19th in the Roosevelt Brewery and Beer Garden for a rebrand celebration party from 5 pm to 9 pm. Kulshan will be showcasing the art from Skyline Printworks including a live art demonstration. You can also expect food trucks, giveaways, and amazing beer served in the scenic cans. Please RSVP to the party on Facebook. https://www.facebook.com/ events/1935283449826237/