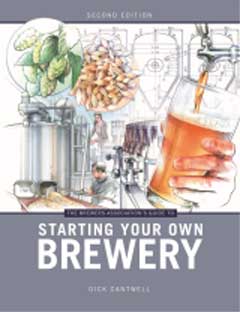 Give the gift of knowledge. Or entertainment. Today I want to provide some recommendations for beer books, which always make great gifts for literate beer geeks. The books listed below came across my desk or at least showed up on my radar. Some were published within the last year, others are just important regardless of the publication date. I’ve divided my recommendations into categories: Fun & Information, Beer Trekking, Home & Pro Brewers, and Cooks & Foodies.

I’ve included links to Amazon for each book, with just a couple of exceptions. It will make sense below. I highly recommend checking out the Brewers Association selection of beer books. They’ve done the research for you. Whether you’re a beer drinker, a budding home brewer, or a hardcore professional brewer, the BA offers a selection of books you need to read.

FOR FUN AND INFORMATION

The Oxford Companion to Beer. By Garrett Oliver.
Available on Amazon

The first major reference work to investigate the history and vast scope of beer, The Oxford Companion to Beer features more than 1,100 A-Z entries written by 166 of the world’s most prominent beer experts. Attractively illustrated with over 140 images, the book covers everything from the agricultural makeup of various beers to the technical elements of the brewing process, local effects of brewing on regions around the world, and the social and political implications of sharing a beer. 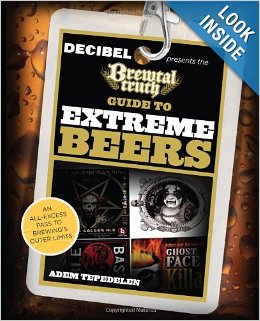 The Brewtal Truth Guide to Extreme Beers: An All-Excess Pass to Brewing’s Outer Limits. by Adem Tepedelen.
Available on Amazon

The Brewtal Truth Guide to Extreme Beers is the first guide of its type, defining what makes certain craft beers “extremely extreme,” featuring descriptions and ratings of more than a 100 of the most insane beers in the world—broken down into a handful of specific categories. These are outrageous brews with unusual ingredients, ridiculously high alcohol by volume (ABV), bizarre names and sometimes unsettling flavors. Working in partnership with Decibel Magazine, and created out of his Brewtal Truth column with Decibel, Adem Tepedelen opens up the fun and fascinating world of extreme beer.

In Boutique Beer, bestselling author and renowned beer connoisseur Ben McFarland scours the globe to showcase 500 of the world’s most exciting premium ales. From American craft brewers and ale-making European nations to the fresh new crop of brewers across Japan, Scandinavia and Australia, McFarland puts his extensive knowledge to work.

The Audacity of Hops: The History of America’s Craft Beer Revolution Paperback. By Tom Acitelli.
Available on Amazon

In 1975, there was one craft brewery in the United States; today, there are more than 2,300. Powered by millions of savvy, devoted consumers and raking in hundreds of millions annually for producers and retailers, the American craft beer movement has changed the brewing industry and the international reputation of American beer. It has upended the Big Beer giants that once seemed untouchable and forever altered the culinary habits of not only millions of Americans but millions more worldwide. This delicious story of plucky triumph has never been chronicled in one volume–until now. 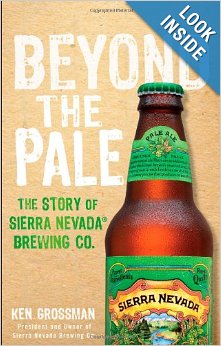 Beyond the Pale: The Story of Sierra Nevada Brewing Co. by Ken Grossman,
Available on Amazon

Beyond the Pale chronicles Ken Grossman’s journey from hobbyist homebrewer to owner of Sierra Nevada Brewing Co., one of the most successful craft breweries in the United States. From youthful adventures to pioneering craft brewer, Ken Grossman shares the trials and tribulations of building a brewery that produces more than 800,000 barrels of beer a year while maintaining its commitment to using the finest ingredients available.

The Naked Pint: An Unadulterated Guide to Craft Beer. By Christina Perozzi.
Available on Amazon

The Naked Pint is a definitive primer on craft brews that celebrates beer for what it truly is: sophisticated, complex, and flavorful. Covering everything from beer history to the science behind beer, food and beer pairings, tasting, and homebrewing, Perozzi and Beaune strip down America’s favorite beverage to its truest form. Whether you’ve just started wondering what life is like beyond the ice-cold six-pack or have already discovered your favorite Porter or IPA, The Naked Pint will help you unearth the power that comes with knowing your ales from your lagers.

San Diego Beer News: Complete Guide to San Diego Breweries. By Brandon Hernandez.
Available on Amazon. This is only available in electronic form.

The San Diego Beer News Complete Guide to San Diego Breweries is the only critical guide to all of the 70-plus operating brewhouses and brewery-owned tasting facilities serving locally produced craft beer as well as 30-plus upcoming brewery projects. Unlike other guides, it incorporates a rating system comprised of three strategically weighted categories—beer quality, service and setting—allowing readers a concise yet comprehensive description of what they can expect when visiting breweries, brewpubs, restaurants and tasting rooms. A panel of Cicerones (the beer industry equivalent of the wine world’s sommeliers), brewers, bar and restaurant owners, beer quality assurance professionals and other industry professionals were polled to compile the numeric scores and ensure their quality and reliability. Vital data such as seating and food options, days of operation, and styles of beer produced make for the most complete informational resource referencing San Diego’s fast-growing, ever-changing craft brewing scene.

Montanas brewing history stretches back more than 150 years to the states days as a territory. But the art of brewing in Montana has come a long way since the frontier era. Today, nearly forty craft breweries span the Treasure State, and the quality of their output rivals the best craft beer produced anywhere in the country. Maybe its because theres also a little piece of Montana in every glass, as the states brewers pride themselves on using cold mountain water and locally sourced barley harvested from Montanas ample fields. From grain to glass, Montana Beer: A Guide to Breweries in Big Sky Country tells the story of the brewers and breweries that make the Treasure States brew so special.

With profiles of each of B.C.’s craft breweries, as well as maps, tasting tours and an insider’s look at the people behind the kegs and casks, Craft Beer Revolution is the definitive guide to British Columbia’s booming craft beer scene, from the movement’s early founders still thriving today-Spinnakers, Granville Island and Vancouver Island-to the current industry leaders-Central City, Howe Sound and Driftwood-as well as the most remote-Tofino Brewing, Townsite in Powell River, and Plan B in Smithers.

FOR HOME BREWERS AND PRO BREWERS

Guide to Starting Your Own Brewery (2nd Edition). By Dick Cantwell
Available from the Brewers Association.

The Brewers Association’s Guide to Starting Your Own Brewery delivers essential industry knowledge to brewers aspiring to chart their own course. While America’s craft beer renaissance continues, emphasis must remain on producing the highest quality beer—or the success of the entire industry is jeopardized.

Water: A Comprehensive Guide for Brewers. By John Palmer and Colin Kaminski
Available from the Brewers Association

Water is arguably the most critical and least understood of the foundation elements in brewing beer. Water: A Comprehensive Guide for Brewers, third in Brewers Publications’ Brewing Elements series, takes the mystery out of water’s role in the brewing process. From an overview on sources, quality and geography, the book leads brewers through how to read water reports, understanding flavor contributions, and the treatment and chemistry of brewing water. A discussion of adjusting water to styles of beer, residual alkalinity, malt acidity, mash pH, brewery process water and wastewater treatment is included. By How to Brew author John Palmer and professional brewer Colin Kaminski. 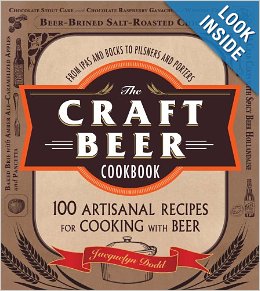 FOR FOODIES AND COOKS

The Craft Beer Cookbook: From IPAs and Bocks to Pilsners and Porters, 100 Artisanal Recipes for Cooking with Beer. by Jacquelyn Dodd.
Available on Amazon

Transform your dishes with the tremendous flavor of craft beer! The Craft Beer Cookbook doesn’t think you need to wait until five o’clock to pop the cap off of a quality beer. From tender pork chops marinated in a bold and citrusy IPA to apple fritters drizzled with an amber ale caramel sauce, the recipes in this book are not only delicious, but they also capture the complex notes and flavors of a perfectly balanced brew. Filled with a diverse selection of varieties, each dish transforms everyday fare into top-shelf plates that are sure to satisfy even the most discerning fan of craft beers.

The Brewmaster’s Table: Discovering the Pleasures of Real Beer with Real Food. By Garrett Oliver
Available on Amazon

In The Brewmaster’s Table, Garrett Oliver, America’s foremost authority on beer and brewmaster of the acclaimed Brooklyn Brewery, reveals why real beer is the perfect partner to any dining experience. He explains how beer is made, relays its fascinating history, and, accompanied by Denny Tillman’s exquisite photographs, conducts an insider’s tour through the amazing range of flavors displayed by distinct styles of beer from around the world. Most important, he shows how real beer, which is far more versatile than wine, intensifies flavors when it’s appropriately paired with foods, creating brilliant matches most people have never imagined: a brightly citric Belgian wheat beer with a goat cheese salad, a sharply aromatic pale ale to complement spicy tacos, an earthy German bock beer to match a porcini risotto, even a fruity framboise to accompany a slice of chocolate truffle cake. Whether you’re a beer aficionado, a passionate cook, or just someone who loves a great dinner, this book will indeed be a revelation.