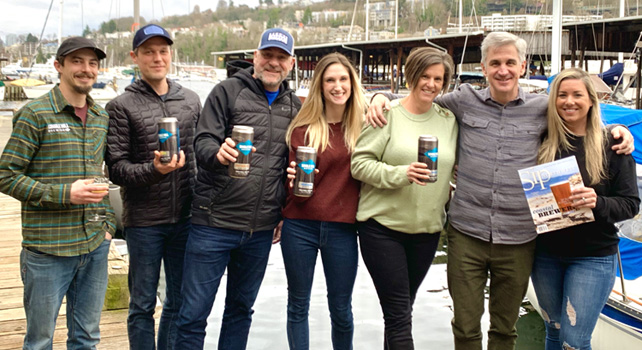 Not far from Yakima, just past Union Gap, Lateral A Road heads due south from Highway 97, bisecting some of the world’s most prolific hop fields. Now there’s a beer named after this infamous hop trail, which seems only fitting. Lateral A IPA by Single Hill Brewing was brewed in collaboration with Zeeks Pizza and Sip Magazine. (Above, the collaboration team.)

The beer will be released on Thursday, May 21, available for delivery from Zeeks Pizza’s locations around the greater Seattle-Tacoma area. By the end of May, Lateral A IPA will see wider distribution. Proceeds from the beer benefit La Casa Hogar, a non-profit organization that provides a variety of assistance programs for the many Latina families that work the farms in the Yakima Valley. 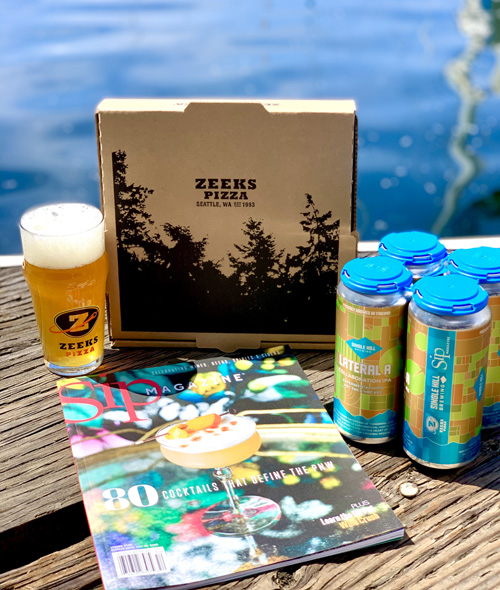 The term single hill refers to a single, experimental hop plant. In the world of hop breeding and farming, a single hill may propagate into an entirely new variety. In creating Lateral A IPA, Single Hill Brewing’s founder and brewer, Zach Turner, used two experimental varieties of hops that were bred and grown in the Yakima Valley:  HBC 692 from Yakima Chief Hops and HBC 586 from John I. Haas. Both companies operate hop breeding and research facilities near Lateral A Road. Turner also relied on malt from Vancouver, Washington’s Great Western Malting, and Spokane’s LINC Malt.

“The road of Lateral A takes you into the densest hop-growing region in the country and it’s the first place I went when I came to Yakima,” Turner says. “We came up with our name while driving back along Lateral A from the single-hill, experimental hop fields at Yakima Chief Ranches. For us, Lateral A is the genesis for a lot of what we do at Single Hill Brewing — it captures much of the spirit.” 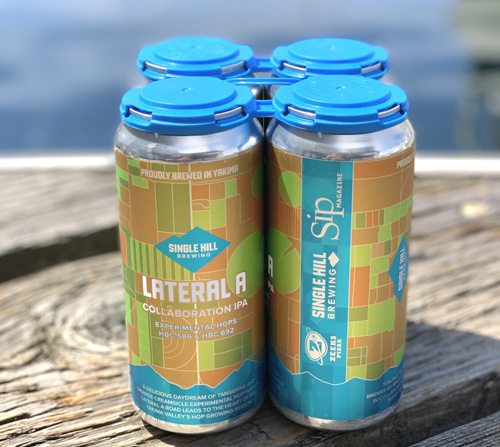 As we discussed in a previous post, Seattle-based Zeeks Pizza is no stranger to collaboration beer projects like this or to the act of delivering beer to your doorstep. Long before the pandemic, and the resulting rise in popularity of beer delivery, Zeeks Pizza was already delivering draft and canned beers, most of which are brewed by beloved Washington and Northwest breweries, like Single Hill Brewing.

Zeeks Pizza was one of the first restaurants to offer beers from Single Hill Brewing after the company’s R&D Director and resident beer guru, Tommy Brooks, discovered the fledgling brewery in 2018.

“Zeeks takes pride in being among the first to discover talented new brewers in the Northwest,” says Brooks. “We love beer and it is one of the main reasons we consistently have one of the best beer lineups in the region. Single Hill has something special, both in terms of the beer and the people. With Sip, it’s a common passion in the local beverage culture. We both love being a place people can come to discover the best beverages in the Pacific Northwest.”

The third partner in the collaboration, Sip Magazine, is a Seattle-based, award-winning, women-owned, drinks-focused publication. The magazine’s passion for its subject matter is evident on every page of each issue: it’s a beautiful, entertaining and informative magazine, one for which I am proud to say I write.

Available from Zeeks starting on May 21st. Thereafter, look for Lateral A IPA at your favorite beer retailers.