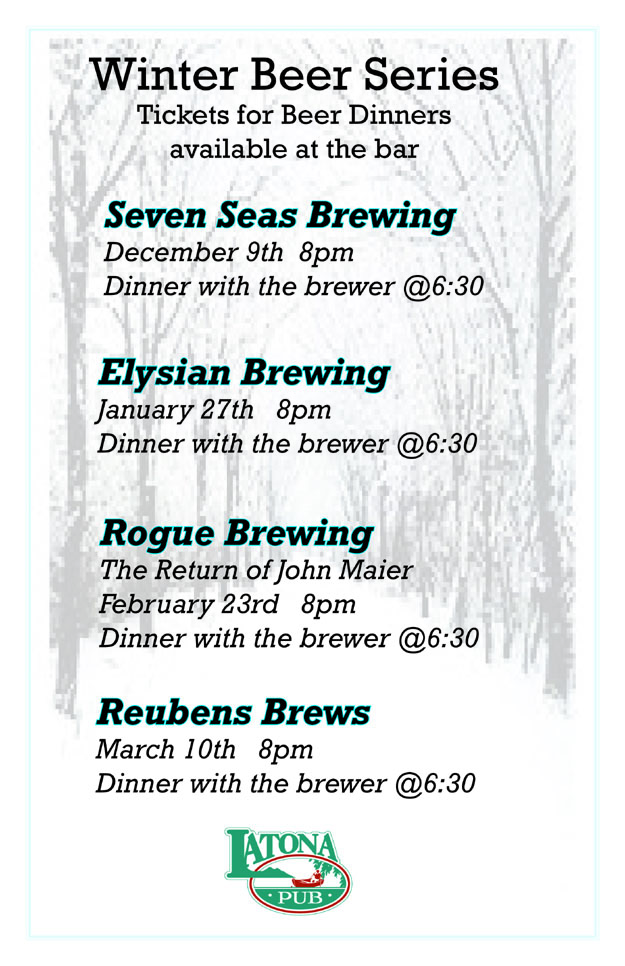 Updated on January 8th to show the dates and breweries involved. See below.

For each of the winter months, Latona Pub (blog sponsor) is lining up special Brewer’s Night events that includes the release of a custom beer made by the featured brewery for the Latona Pub.  The series starts with 7 Seas Brewing on Monday, December 9.  A few weeks ago the Latona crew visited the 7 Seas brewery in Gig Harbor to participate in the brewing of Gertie the Winter Beer. That beer will be released at the Latona Pub on Monday night.

Each brewer’s night event starts with a Brewer’s Dinner in the Latona Pub’s loft at 6:30.  Tables are pushed together to form a big, fun family-style space. The kitchen prepares a special three-course meal to pair with a total of  four different schooners of 7 Seas beers. The brewers join you for dinner, talk about each of the beers, and enjoy your company. Space is limited, and reservations are required.  Cost $30. Contact the pub to make reservations 206-525-2238. Better yet, stop by pub to make your reservations.

The actual Brewers Night event get started downstairs at 8:00, following the Brewer’s Dinner. Each event will feature the expected swag giveaways, Q & A with the brewers, and special beers on tap. The Brewers Night events (8:00) are open to everyone; reservations are only needed for the Brewers Dinner (6:30).