Research suggests that craft beer drinkers across the country are increasingly fitness conscious and are beginning to make beverage choices accordingly. Instead of losing those consumers to seltzer or some other non-beer option, it seems craft brewers are trying their hand at creating beers that offer the same kind of flavor experience at lower caloric impact.

Data from Nielsen, the well-known market research firm, showed that the number of craft beers with “light” or “low-calorie” claims on packaging increased 37 percent in 2019. There is nothing wrong with that. Like all businesses, craft breweries follow trends more often than they set trends.

I’ve sampled a number of these low-cal beers over the past year or two. From what I’ve experienced, the breweries that beer lovers already trust to make good beer regardless of calorie consciousness make the best low-calorie beers. The breweries that emerged out of thin air for the sole purpose of creating these kinds of beers failed to impress me.

Here are some notable examples of what I’m talking about. Deschutes Brewery offers two, Wowza Hazy Pale Ale at 100 calories and Da Shootz American Pilsner at 99 calories. I actually like both of those beers. Other sub-100 craft beers I’ve sampled include Lagunitas DayTime IPA, Oskar Blues Oney IPA, and Dogfish Head Slightly Mighty IPA. No complaints, but no accolades either.

But what if one of the very best breweries in the country, one noted for never cutting corners or taking shortcuts, decided to brew a calorie-conscious beer? I’m talking about a brewery that is, perhaps, the most-award-winning, lager-focused brewery in North America. How would their low-cal beer turn out?

Chuckanut Brewery just introduced Chuck Light, a lager that weighs in at just 103 calories (per 12 oz). 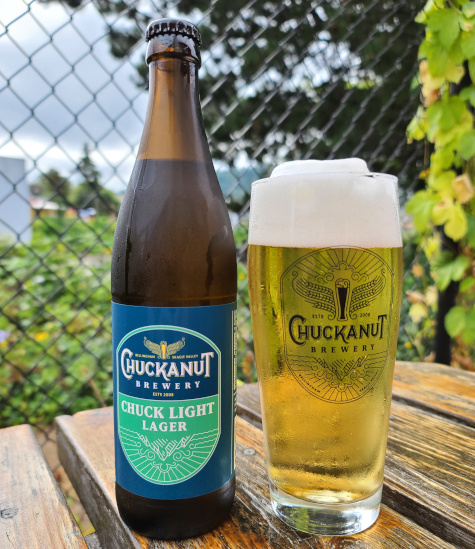 Here’s the release notice from the brewery.

How much Chuck could a woodchuck chug if a woodchuck could chug Chuck? That’s the question on everyone’s mind now that Chuckanut Brewery has introduced Chuck Light in bottles and on tap. This isn’t your ordinary light beer but a craft beer that’s made with the special attention Chuckanut Brewery is known to take when brewing. Using the best raw ingredients and carefully crafting a beer that when tested is only 103 calories per 12 oz pour, this is a great light lager. Just in case you want more beer though, Chuckanut packages Chuck Light and all its beers in half liter bottles, that’s more like 16.9 ounces of awesome low calorie beer!

Using a combination of light colored malts and gentle hops with a dry finish, this balanced easy drinking beer is for those that want to watch their calorie intake. Always delicious but lighter in style and flavor, this is an all day kind of beer great with salads, fresh veggies, seafood and bbqs. Chuck Light compliments food choices rather than overpowers whatever is on your plate. The Oregon Beer Lab tested Chuck Light and found it has  103 Calories, 0 Fat, 1g Sugar, 6g Carbohydrates and 1g Protein per 12 ounce pour. Even if you aren’t looking for low calories you can enjoy Chuck Light for its fresh flavor and quaffable taste!

Chuckanut Brewery & Kitchen, located at 601 West Holly St, Bellingham, was awarded the National Small Brewpub/Brewer of the Year 2009 and National Small Brewery/Brewer of the Year 2011 at the Great American Beer Festival. Currently both locations offer outdoor seating (covered and waterside) as well as to-go pick-up for kegs, growlers and bottles of Chuckanut beer. A full food menu is available at North Nut. The South Nut Tap Room at 11937 Higgins Airport Way, Burlington is located at the Port of Skagit. Now both locations are open 7 days per week: North Nut (Monday-Sunday 12-8 pm) and South Nut (Monday-Thursday 3-6 pm and Friday-Sunday 1-6 pm) during phase 2 of Covid rules. Check out additional information about Chuckanut at www.chuckanutbrewery.com.

Masks in bars and taprooms. What's all the hubbub about?
Enjoying great beers in the great outdoors of Port Townsend, Washington
Georgetown Brewing - any more Manny's cans? Taproom reopening? Other updates