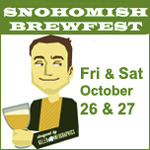 Here is the list of breweries, and the beer they are pouring, for this weekend’s Snohomish Brewfest (blog sponsor). For more information, visit the event website.

The information is presented as it was delivered to me.

A new brown ale on steroids! Stock up now to warm those cold winter nights.

A Northwest style IPA utilizing locally grown hops with plenty of malt backbone to give a smooth and pleasant finish.

Ninkasi used all German malt from Weyermann (pils, Munich, Caramunich and Dehusked Carafe) to concoct this Prussion-style brew. Two early additions of U.S. Hallertau hops provide a spicy balance. This beer was lagered for two months before being centrifuged, and then lagered another two months for a clean, crisp tasting experience at the festival.(Color: Brown)

Available in 22oz. Bottles and On Draft, Special Release

A salute to the playful side of summer, we had fun with this beer! Maiden the Shade has a big robust hop character from the liberal use of 7 different varieties of hops. It is completed with a light colored malt backbone to stay in balance. Kick back and enjoy!!

This beer has been dubbed a Summer IPA. Big powerful combinations of many different kinds of hops give a big hop profile. We added Flaked Barley to the beer to make for the smooth body and lighter Summer style IPA. Another Ninkasi Cult favorite!

A delicious northwest seasonal brewed with winter in mind. A dark double alt, malty, nourishing and delicious, it’s sure to keep the winter at bay, and yes, Sleigh’r does rock!

An Alt ferments with Ale yeast at colder lagering temperatures. This effect gives Alts a more refined a crisp lagerlike flavor than traditional ales. The Double Alt means that it has been Ninkasified. Regular Alts are 5 to 5.5 % and 40 ibus.Sleigh’r has a deep toasted malt flavor that finished dry and has 7.2 % alc and 50 IBUs keeping it in a perfect Alt balance.!

The Northwest’s original, unfiltered and dry hopped amber ale. African Amber’s pioneering and innovative style is proof that drink-abilty does not have to be achieved by sacrificing flavor. This beer erupts with a floral, hoppy taste, followed by a well rounded malty middle, finishing with a nicely organic hop flavor. Locally sourced two row grain and a blend of specialty malts give our amber its rich taste. Further complexity is achieved by leaving the beer unfiltered, providing exceptional flavor, as well as giving our amber its unique “cloudy” look. Lastly, we actually place a bag of fresh, locally grown, Yakima valley hops in each keg creating what has become the original, cult classic, northwest amber ale.

Hints of chocolate and coffee accent this rich and creamy brew. Blackcat’s smooth approachable flavor demonstrates that dark beers can be enjoyed by all. Our traditional Porter features five select specialty malts, English Ale yeast and fresh Northwest hops. Blackcat is clean and crisp, yet complex and flavorful. A superbly balanced beer that is drinkable any time of the year.

Created by the brewery’s founder, Quilter’s Irish Death is what we call a dark, smooth, ale. Any attempt at classifying it just ends up sending beer geeks into a style guidelines diatribe. So forget style guidelines. Is your pursuit of micro beer about tasting copies of a style that fit guidelines anyways? (Neither is ours) We lovingly refer to it as beer candy. While tempting to session this beer, the name is a necessary reminder that despite the surprising approachability, this beer weighs in at a hefty 7.8% ABV.

Wheat, honey and ginger. A hefe with flavor before the fruit. No lemon required. In fact, please spare our beer from the embarrassment.

This Oatmeal Stout is dark brown to almost black in color with a rich cream colored head. It has a pleasant, full-bodied, smooth profile with an aromatic blend of coffee, oats, and roasted malts. Savor the long, rich finish that tempts you with just a subtle hint of dark chocolate. This oatmeal stout is something great to behold, enjoy!

An American Brown Ale that is an exceptional choice for the Northwest craft beer drinker. This deep coppery brown ale has a toasty caramel flavor with an evident, but not overpowering, hop aroma. There is a well balanced bitterness that doesn’t linger, but transitions to a very clean finish with just a subtle hint of citrus from dry hopping. A perfect ale for year round enjoyment!

Pumpkin beer made with local Snohomish pumpkins from Bob’s Farm.

A complex fruit ale, brewed with pumpkin in the mash and raisin in the boil. Light-bodied. Dried raisin in the aroma with dark malts and subtle pumpkin flavors. ABV 7%

“A Bouquet of Balance”

This ‘Northwest Classic’ is a harmonious blend of our pride and our passion inspired by the rugged and gentle terrain of the Cascade Mountains. Starting with the pristine waters of Icicle Creek, we add the intense flavors and aromas of our locally grown Yakima hops, pairing the citrusy floral hop notes with a sweet-malty undertone. It’s an IPA that’s breaking the barrier between bitter and bold.

A high gravity pumpkin ale brewed with barley, fresh roasted pumpkin, hops, cloves, cinnamon, nutmeg, star anise, water and yeast, it is one of the local seasonal favorites. This beer is produced in very limited quantities each fall as part of the John Mitchell series.

More Info about this beer:

More Info about this beer:

The turnaround is the last few notes of the blues progression, the cadence at the end of the phrase which sets up the next verse.

Red ales have a long tradition in the Northwest, and have diverged significantly from their Irish red roots. The Northwest-style red has a complex hop aroma balanced by the use of lots of caramel malts, which provide a sweeter taste and give the beer its distinctive red color.

TBB’s Northwest Red Ale is copper going on ruby red, with a slightly sweeter feel than the rest of our beers. The malt gives the beer a pleasant medium caramel flavor. Six different hops are used in this beer, including Chinook which adds a Northwest outdoors pine aroma, a strong homage to the style.

Although it seems like a logical extension of the whole East India IPA thing, India Black Ale (or American Black Ale) was actually conceived of right here in the USA. Historically, the British dark beers have always been low to moderate in alcohol and very lightly hopped, so a British India Black Ale didn’t actually exist. But we like hops and need little encouragement to add lots to dark beers as well as pales.

TBB’s India Black Ale is malted to be black and strong, with a relatively dry feel. Strong hints of coffee predominate, although there is no coffee in this beer. As with the IPA, five hops are used in this beer, although in different proportion to balance the slightly more acidic dark malt character.

A year round treat, has a dark ruby looking complexion with layers of rich malt, subtle hints of blackberry and smooth finish brewed with 2 Row Barley, Chocolate and Crystal Malts. This unique ale has won several awards at multiple Brew Festivals, a great beer to share with your friends.

Big Imperial IPA with a robust, malty, and hop profile that is perfectly balanced with the high alcohol content brewed with double the amount of 2 Row Barley Victory, Munich and Crystal Malts. We use the best hops available to create this IPA on steroids. Remember two pints is all you get!

Very similar to an Oktoberfest, this lager is full of malty goodness.

Pumpkin Sweet Potato Stout. -our sweet stout base recipe but deleted everything and then added equal parts sweet potato and pumpkin and some secret pumpkin pie spices. 6% ABV

Sour Egyptian Spiced Red. -a red ale with a sour side and balanced warmly with spices traditionally used in the ancient egyptian mummification process. 5.75 % ABV

A light, lovely cider, with a purple blush, that blends heirloom and organic dessert apples with the tart mysteries of organic black currant. Immensely drinkable.

Bright cider, made with heirloom and organic dessert apples, blended with the bold citrus tang of organic Cascade hops. Some say it’s like sipping a meadow; some say it’s like chewing on grass. A hopped adventure.