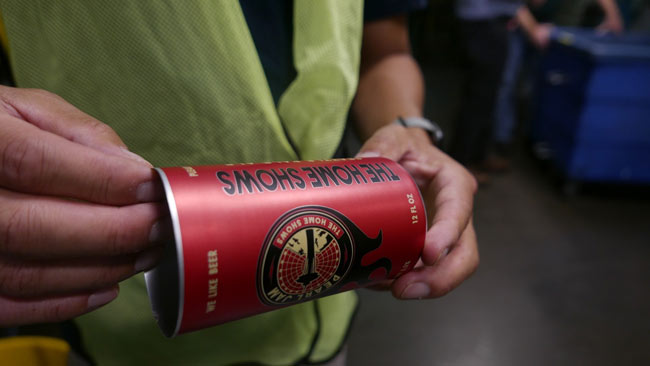 “You can’t be a Seattleite and not feel the gravity of the situation that’s going on in our streets,” says Stone Gossard of Pearl Jam. “The issue of homelessness is everywhere. Seattle is an amazing town, one I’m proud to be from. It’s the kind of place that if we really come together and focus on something, we can accomplish results beyond what people expect.”

Coming together is exactly what the Home Shows campaign is all about, bringing together local businesses, large and small, to help address the issue of homelessness in and around Seattle, businesses like Tom Douglas Restaurants, Starbucks, Nordstrom, Alaska Airlines, and many others. The list includes two local breweries: Fremont Brewing and Georgetown Brewing. The latter of the two, Georgetown Brewing, is brewing a special beer called Home Shows Seattle Pale Ale, which we discuss below.

On August 8th and 10th, Pearl Jam will perform at Safeco Field. More than concerts performed in their hometown, The Home Shows is a program of Pearl Jam’s Vitalogy Foundation and will help fight homelessness in King County. The band will donate $1 million of its own money and is challenging the community to raise $10 million to address homelessness.

Like many bars and restaurants around Seattle, on August 8th Fremont Brewing will donate proceed from taproom sales to help combat homelessness. Fremont Brewing elected to donate proceeds to Mary’s Place, an organization that empowers homeless women, children, and families in emergency situations.

Those lucky enough to attend the immediately sold-out Pearl Jam shows at Safeco Field in August will have the opportunity to enjoy Georgetown Brewing’s Home Shows Seattle Pale Ale at the venue. Other beer lovers around Seattle should look for the beer on draft at local pubs and in cans at beer retailers. For each six pack sold, the brewery will donate $2 to the Pearl Jam Vitalogy Foundation as part of the campaign to fight homelessness. Georgetown Brewing says that the projected release date for Home Shows Seattle Pale Ale is July 20th.

According to Matt Edwards, the Research and Development Brewer at Georgetown Brewing, Home Shows Seattle Pale Ales is “an easy drinking pale that skips out on the bitterness while boasting aromas and flavors of fresh mandarin orange, ripened pineapple and honeydew melon.”

So how did Georgetown Brewing end up producing a beer for the Home Shows campaign? Short version, they were approached by the Vitalogy Foundation, an organization with which they’ve been friends for a while.

“Honestly, it is really such an honor to work with Pearl Jam and the Vitalogy Foundation,” says Ingrid Bartels of Georgetown Brewing. “We are such fans of the music, but also the people in the organization, never in a million years did we think we’d be doing something like this.”

Regarding the issue of homelessness, Bartels says, “It is hard to escape the reality that the situation is not improving. We see it everyday in our own backyard, and it is frustrating and heartbreaking. At some point, you can’t look at the RVs parked all over Georgetown and just say “not my problem”.”

Away from drinking beer, the Vitalogy Foundation offers several ways for you to contribute to the Home Shows’ mission. You can buy a T-shirt, you can volunteer, you can donate. Your donation will be matched. Visit the official website for more info.