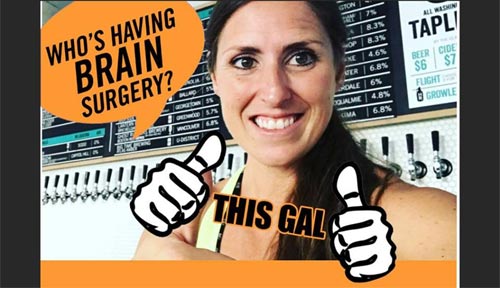 One of the things I love about the local beer industry, and the local beer scene in general, is the way we rally around each other when we’re in need. In this case, the industry is stepping up to support one of its own, Laurel Trujillo, owner at Ounces Taproom in West Seattle. This Thursday, March 28 you have ample opportunities to get involved at Ounces or any of a number of breweries (listed below).

I think we’re all familiar with the saying: “Well, it’s not like it’s brain surgery or anything.” It’s meant to suggest that something is easy or simple. Thing is, sometimes it is exactly like brain surgery. No one is more familiar with that fact than Laurel, one of the owners at Ounces, a family-friendly taproom and beer garden in West Seattle. She was recently diagnosed with a brain tumor and will soon face brain surgery.

Laurel and her bar are fiercely loyal to local beer and, in turn, local breweries are loyal to her. Ounces is teaming up with a bunch of local breweries to raise funds for the American Brain Tumor Association (or ABTA). On Thursday, March 28th each brewery will tap a certain beer at its taproom for the cause, donating $1 for each pint sold. Also, at Ounces, they will do the same, tapping into a collection of beers.

Keep an eye on the Ounces Facebook page for more info. The exact taplist is forthcoming.

“Hoping you’ll join me and our brewery friends to help raise money for a cause very personal to me,” said Laurel on the Facebook event page. “I was recently diagnosed with a brain tumor and will be going under the knife (hence the name, lol) on April 3rd to have it removed.”

“Before the surgery, I’d love for you to come have beer/cider with me and help raise a bunch of money for brain tumor research!”

“Here’s how the fundraiser works: We’ve partnered with 21 of our brewery friends (and 2 cideries) to raise funds for the American Brain Tumor Association (or ABTA). For 1 night only, both us and the 23 breweries/cideries will be tapping up a specific beer/cider and donating $1 of every pint sold (us at Ounces and each of the breweries/cideries at their respective taprooms).”

“So on Thursday, 3/28… head to Ounces or one of the below breweries and let’s all drink beer for a good cause!”