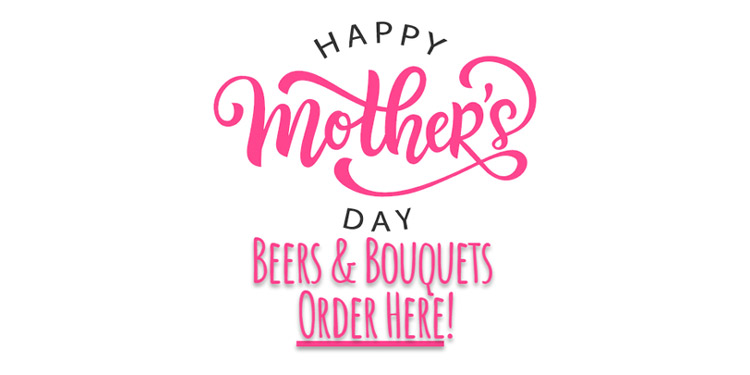 Two things I’ve noticed about Marley Rall. First, she doesn’t question whether something can be done; if it needs doing, she just does it. Second, she doesn’t seem too concerned about how it benefits her or her business; her motivations are generally altruistic. The owner of Brewmaster’s Taproom in Renton and Brewmaster’s Bakery now operates Brewmaster’s Foundation, a philanthropic umbrella for all the things Marley Rall does to support her community.

It’s kind of a long story, so I will cut to the chase. The local growers who sell flowers at Pike Place Market and at neighborhood farmers markets are hurting and need a way to sell flowers. The local breweries who brew the beers that you and I love also find themselves in a similar position. So why not bring the two together?

Flowers and beer for Mother’s Day. Order flowers from any of the breweries listed below. Oh, and beer.

This Mother’s Day (May 10th) 14 local breweries are participating in Beers & Bouquets, an event supporting the local beer and farming industries. You are invited and encouraged to pre-order bouquets of fresh flowers and special beers from the participating breweries and then swing by on Mother’s Day to pick them up.

As beer enthusiasts, we all know how hard the pandemic shutdowns have hit our local breweries. For family farms, the situation is just as dire, if not more so. Right now, the Pike Place Market would be bustling with cruise-bound tourists. The neighborhood farmers markets would be crowded with shoppers. Even with the farmers markets slowly and cautiously reopening, the crowds are just a tiny fraction of what they would be normally. This is crippling for all and catasphropic for many local family farms.

The Brewmaster’s Foundation has been working over the last six weeks to bring the local brewing community together with the local farming community.  It started with weekly CSA Boxes (community supported agriculture) featuring local farmers and breweries. Also, the foundation offered Treat Yo’Self Fridays with flowers from Woodinville Valley Farm.

Order flowers from any of the following, then pick them up (along with your beer) on Mother’s Day.