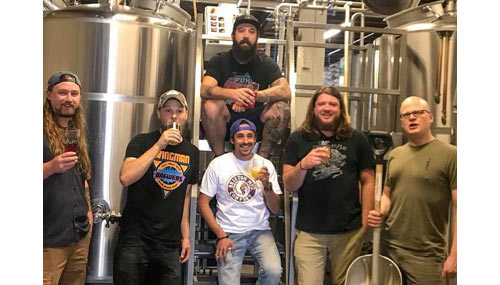 When Washington state legalized cannabis in 2014, some professional brewers immediately began considering ways in which they might incorporate the magical herb into their beers. Although consumers were free to smoke, eat and otherwise consume products containing THC and CBD, brewing a beer that contained those substances remained illegal. That has not changed. Nor has the desire to brew marijuana beer. (Pictured above: representatives from Wingman Brewers, Boundary Bay Brewery, and Trap Door Brewing gather on brew day. Below: Mighty HighPA cans.) 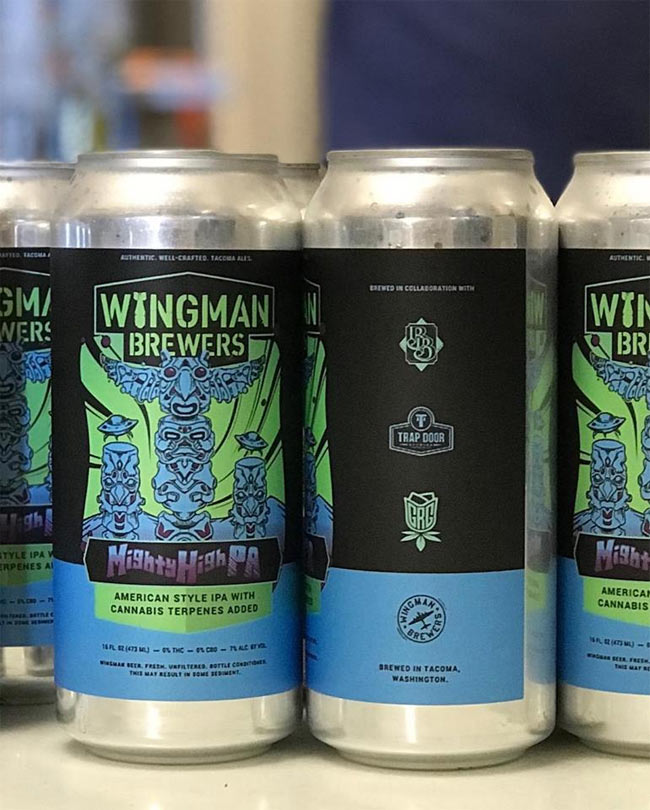 This is not exactly Washington’s first marijuana beer. In 2013 Hilliard’s Beer and Redhook Brewing teamed up to produce Joint Effort Session Ale, a beer that celebrated the passage of Initiative 502, which legalized marijuana in Washington. Something of a token effort (pardon the pun), that beer was brewed using hemp seeds, so there were no legal issues: the seeds do not produce a mind-altering effect and are often used (legally) as a dietary supplement. Hemp seeds are a great source of protein and omega acids, but are generally quite flavorless and really don’t contribute much character to beer.

So if brewers cannot take advantage of marijuana’s psychoactive impact, and if hemp seeds offer no significant benefits to the beer, what possibilities exist? The answer lies deep in the plant, in the essential oils that give cannabis its fragrant, aromatic properties, and which can be used as additives for taste.

“Terpenes are naturally occurring oils and compounds within all plants, fungi and even some bacteria,” explains Ken Thoburn of Wingman Brewers, which recently teamed up with two other breweries and one cannabis producer to make a beer using terpenes. “They’re used by plants to communicate with each other, or with animals, in a similar way that pheromones work. Some terpenes smell fantastic.”

Humulus lupulus (hops) and Cannabis sativa (marijuana) have similar organoleptic properties in that they share a similar look, taste and smell. Some people contend that they are both part of the same plant family, however that is a complicated scientific discussion that leaves very smart, educated people scratching their heads. One thing is certain, some hops and marijuana actually share the same terpenes. Whether you enjoy consuming it or not, many people appreciate the pungent, sometimes sweet, sometimes skunky, sometime spicy aroma of the marijuana flower. Those fragrant, aromatic properties excite brewers. Just as the increasing variety of new hop breeds offer brewers new opportunities to build flavor, so do terpenes. 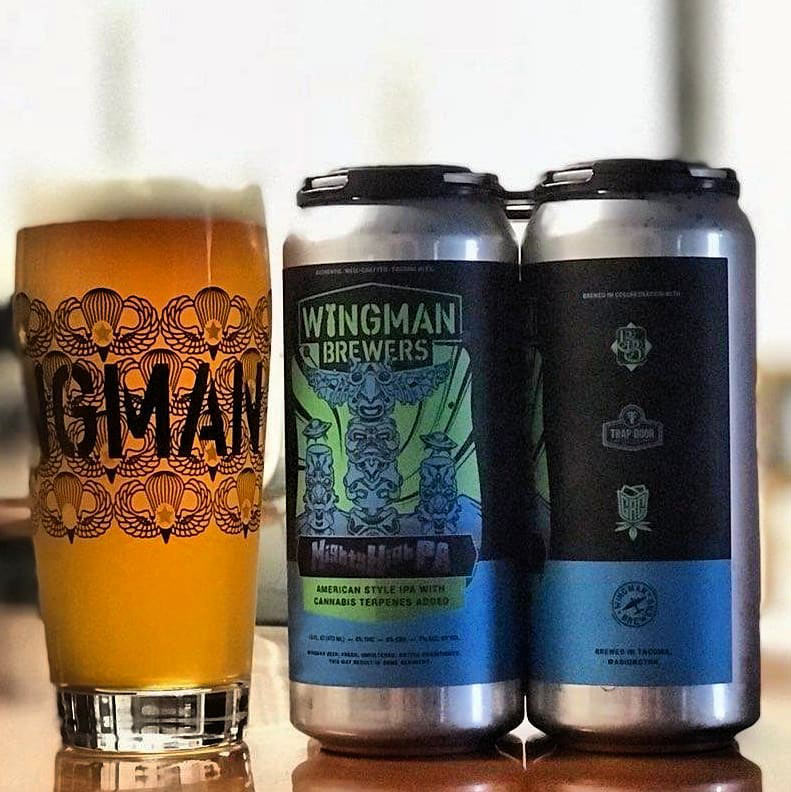 Wingman Brewers of Tacoma, Trap Door Brewing of Vancouver and Boundary Bay Brewery of Bellingham joined forces with Green Rose Gardens of Omak to create a beer that includes cannabis terpenes as an ingredient. Because the terpenes were extracted from the plant, and because the resulting compounds contain no TCH or CBD, this marijuana beer is entirely legal. That is, none of the psychoactive properties, but plenty of the aromatic, flavor properties.

Mighty HighPA is described as, “A smooth light bodied beer featuring Denali and Meridian hops along with Blue Dream terpenes.” The beer has already been released, but the official release party is scheduled for Friday, October 19th at Trap Door Brewing in Vancouver. The band Mighty High will perform at the event. The beer is available in 16-ounce cans at select retailers and on draft in limited supply.

“When choosing what hops to use we, blended hops and cannabis together to get an idea of the aroma in the finished product,” explains Thoburn. “We settled on Blue Dream, which is a cannabis variety with high levels of terpenes that lend an almost tropical aroma. Many of these terpenes in the Blue Dream were also present in the hops we choose for the beer (Denali and Meridian), but our hop usage was cut way back to make way for the cannabis terpenes.”

“Once we selected the cannabis variety we wanted to use, Green Rose Gardens facilitated getting the terpenes pressed out and separated from the rest of the cannabis in a lab so that we could show there is no THC and no CBD, which are currently illegal to have in beers made in Washington state. The end result is even better than we could have imagined and may have some hop farmers worried that the next big boom in beer could come from the cannabis industry.”

“We saw the natural fit of making a terpene beer by revitalizing a beer we released a few years ago with local reggae artists Mighty High,” says Thoburn. “So we brought back the Might HighPA, but this time we put cannabis terpenes in it.”

Our local brewers are not the only ones excited about using terpenes in beer. For instance, not long ago I had a conversation with Fal Allen, the brewmaster at Anderson Valley Brewing in California, about this topic. He explained that his brewery is also working to include terpenes in beer. It is highly likely that many other breweries are using, or at least experimenting with, terpenes as well.

Reuben's Brews teams up with Jack's BBQ for an online beer dinner
To mask or not to mask? and other important questions needing answers
Heather and Matt McClung, helping steer Hale's Ales into the future