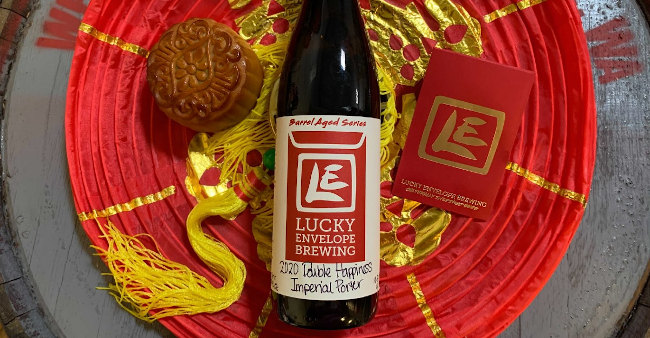 Lucky Envelope Brewing invites you to join them and celebrate the season—the harvest, the full moon, and the community. The Mid-Autumn Festival is a tradition at the brewery, one they’ll celebrate this year on Thursday, October 1st, and Friday, October 2nd. Along with yummy moon cakes and some lucky red envelope giveaways, the event features the release of three special beers.

This year the Mid-Autumn Festival will look a lot different because Lucky Envelope is committed to protecting the health and safety of its customers and staff. Expect to see appropriate social distancing and other safety protocols. They are offering seating for the event via a first-come-first-serve basis or by reservation. See below for more info about reservations.

Seating: Limited, available as first-come-first-serve or by reservation

Special Offerings: “Double Yolk and Lotus Seed Paste” Mooncakes a la carte will be available for purchase via pre-order on our webstore on Monday, September 28th at noon (limit 2 per customer). Any remainder will be sold at the Tasting Room on October 1st. A limited number of red envelopes containing discounts and giveaways will be given out to customers beginning at open on each respective day.

We have dedicated a portion of our tables as 85-minute reservation timeslots that can be booked in advance for $18. We are introducing reservations as a way to skip the wait and guarantee parties one table with seating for up to 5 (all ages). Reservations also include one Tasting Flight of four 4oz draft pours and one mooncake. Reservation timeslots are available to book through our webstore: https://store.luckyenvelopebrewing.com/mid-autumn-festival

This sour is brewed with Seattle’s own MarketSpice aromatic Chinese black tea, lychee juice, and lychee peel. Lychee, a tropical fruit native to Southeast Asia, is often described as the perfect blend of sweet and tart. The earthy flavors of black tea and the fruity flavor of lychee meld together wonderfully in our lightly acidic base golden sour.