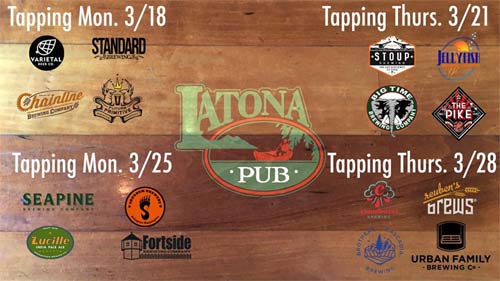 March IPA Madness pits 16 IPAs against each other in head-to-head battle. There are two aspects to the tournament. First, fill out a bracket and make your predictions. Second, participate in the tastings and help pick the winners.

You have until March 21st to fill out your March IPA Madness bracket (see the list below). Make your predictions about which beer will advance from each bracket until you’ve picked the ultimate champion. The most accurate brackets will win prizes like brewery swag, gift certificates, and the opportunity to attend a Latona collaboration brew day and name the beer.

Pub patrons determine the winners via blind tastings. The victors move on in a bracketed tournament until a single champion stands alone. Latona Pub will have four IPAs on tap at the same time, on the same day. (Schedule below.) You can order a flight of four 4.5-ounce pours for $7. The beers will be numbered 1-4 and you’ll rank them based on blind tasting alone.

Brackets can be turned in at the Latona up until the second round starts (noon on March 21st.)

On April 1st they will tap the final four. The same days as a very important basketball game.