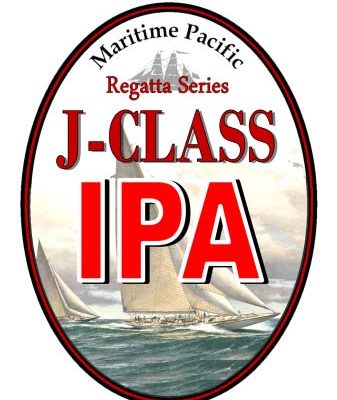 Fourth of July weekend marks the launch of the next beer in Maritime Pacific Brewing Company’s Regatta Series: The J-Class IPA. This is the second beer released in the series, which will eventually consist of four beers released over the course of four months. Each beer is a tribute to a legendary America’s Cup Race, making use of experimental and international hop varieties. Read our original story to learn more about the Regatta Series.

Maritime Pacific Brewing Company announces the launch of the second IPA in its 2016 “Regatta Series IPAs”, which will sail into the Seattle market on 4thof July Weekend.  We continue our IPA salute to the legendary America’s Cup Race, which began in 1851 with a race around the Isle of Wight for which the schooner “America” took home the prize.

Our second Special Limited Release IPA heralds the birth of the J-Class boats, which raced from 1930 until 1937.  Now commonly referred to as J-Class Yachts, these were the first yachts in an America’s Cup match to be governed by a formal design rule. The only design restrictions facing previous defenders and challengers had been minimum and maximum boat lengths as set forth in the Deed of Gift of 1857.  Only 10 J-Class yachts were ever built to compete to this design rule and receive an acceptable America’s Cup Race rating of between 65 and 76.

The introduction of this new, formulated design rule inspired the creation of one of America’s top Cup defenders in the J-Class, the beautiful new racing yacht christened “Ranger” in honor of the famous U.S. frigate skippered by John Paul Jones.  With an impressive 135.5 feet in overall length, a new high-aspect Bermuda style rig with a Duralumin (new aluminum) mast and over 7,546 square feet of sail area, Ranger’s innovative design drew her a 76 rating, the highest in the new formulated class of boats competing for the America’s Cup.  Ranger was built by the famous Bath Iron Works of Bath, MI and was funded and skippered by Harold Vanderbilt.  Her solid design and technical advantages made her so formidable that she went on to win straight victories in the 1937 America’s Cup Race.  She also became the last U.S. defender of the America’s Cup until after World War II.  Today the J-Class lives on in the mega yacht world wherever racing enthusiasts still gather to watch replicas of these graceful and beautiful yachts go head to head.  Maritime’s new J-Class IPA is our tribute to these magnificent racing yachts of yesterday.

Bold spice and floral nose with a soft malt body and citrus finish.