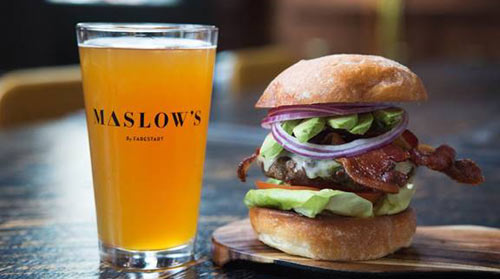 FareStart is a Seattle-based, non-profit organization that transforms lives by empowering people who are experiencing homelessness or living in poverty through job training and employment in the foodservice industry. Among its other ventures, the organization operates Maslow’s by FareStart, a restaurant in South Lake Union that serves up American fare. Starting in April, Maslow’s will introduce Burgers + Brews, a beer and burger pairing experience. Working with a brewery partner each month, on the last Wednesday of each month they’ll serve up two new burgers paired with two beers.

Here is more information about all of this, straight from FareStart.

SEATTLE (March 27, 2018) – Maslow’s by Farestart has launched a new monthly event series called Burgers + Brews at Maslow’s in partnership with some of the Northwest’s more celebrated craft breweries. On the last Wednesday of each month, Maslow’s will create and serve two new burgers not found its regular menu and pair them with two top brews from that month’s Northwest beer partner.

The series launches with Snoqualmie Fallls Brewing on Wednesday, April 25.  Other featured breweries in the line-up thus far are Bale Breaker Brewing (May), Maritime Pacific Brewing (June) and Lowercase Brewing (July) with more to follow. Each burger and brew pairing is priced at $20 and will be available at Maslow’s – both in its energetic bar space and on the main dining room menu – on that day only.

The exact dates for upcoming Burgers + Brews at Maslow’s events are as follows – more to be announced as they materialize:

Located in South Lake Union, Maslow’s by FareStart is a classic American restaurant featuring small and large plates that stand alone or can be shared, created by our renowned chefs alongside FareStart apprentices and served fresh daily for lunch, happy hour and dinner. In addition to the new Burgers + Brews event series, patrons may enjoy one of Seattle’s hottest Happy Hours weekdays from 3 – 6 p.m. with $3 draft beer, $4 draft wine and $5 well liquor selections.

The restaurant takes its name from Abraham Maslow who developed the well-known theory of motivation called the hierarchy of needs. This aligns with the FareStart mission of empowerment and demonstrates the reason for the restaurant – to provide the next level of needs to help move people toward a living wage on their journey to security and self-sufficiency. Every dollar of profit from Maslow’s is reinvested in programs to recruit, train and support its students and apprentices.

FareStart is a nonprofit organization that transforms lives by empowering people who are experiencing homelessness or living in poverty through job training and employment in the foodservice industry. Since 1992, FareStart has provided opportunities for more than 9,500 adults and youth, while serving over 10.7 million meals to Seattle area schools, homeless shelters, and healthcare facilities. Ninety percent of adults who graduate from FareStart gain employment within 90 days of graduation. www.farestart.org