Life in a mountain town is a bit different than life in the city. To us city folk, it seems much more honest and much less complicated. Life in a town like McCall, Idaho is uncluttered. It’s not congested with superfluous nonsense you don’t really need.

Generally, a small town offers just one of each of life’s essentials: one pharmacy, one hardware store, one grocery store, and so on. I suppose that’s why it surprised me to learn that McCall has three breweries. For a town with approximately 3,500 permanent residents, that’s impressive.

I recently ventured to McCall to explore the local beer scene and the surrounding environs. Here’s what I found.

McCall is not just some backwater burg tucked away in the hills of Southwestern Idaho, it’s a recreation destination and the population swells during the winter and again in the summer. I was told, anecdotally, that for every full-time resident, there are two part-time residents. That is, a lot of people who live in places like Boise, Seattle, Palm Springs and Phoenix own second homes in McCall. Many of those homes are available to other, less-regular visitors via services like VRBO.

A Brew with a View

The rooftop deck at Salmon River Brewery is nothing short of spectacular, offering an expansive view of Payette Lake and the nearby mountains. Located atop a building next to the main brewpub, the large beer deck is serviced by its own bar and set of taps.

The brewpub itself is built in the old train depot and oozes with charm. In its day, it was a diminutive depot and today that makes for a cozy and convivial pub. The beer menu is complemented by a selection of pub grub, featuring typical fare like fish and chips as well as street tacos, an elk burger, a Thai beef basil salad, and more.

The range of beer is wide, seemingly divided by yeast types. The Blonde Sabbath, a Belgian-style blonde pours hazy-gold and offers a fruity, citrusy character along with some banana character provided by the yeast. The Shiver IPA is rock solid, with a nice piney finish as you might expect in a real Northwest-style IPA. Don’t miss the Big DIPA double IPA, an award-winning beer that was my favorite of the bunch. 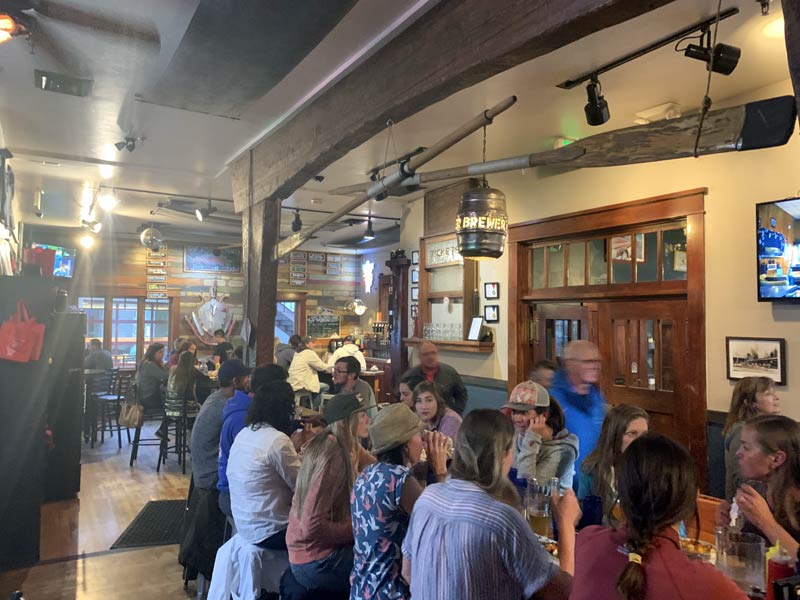 Pro Tip: The brewery is right across the parking lot from Hotel McCall, which is a lovely boutique hotel. Charming, historic lodging offering the expected modern conveniences and a variety of room options. It’s close to the lake and close to everything else in downtown McCall. 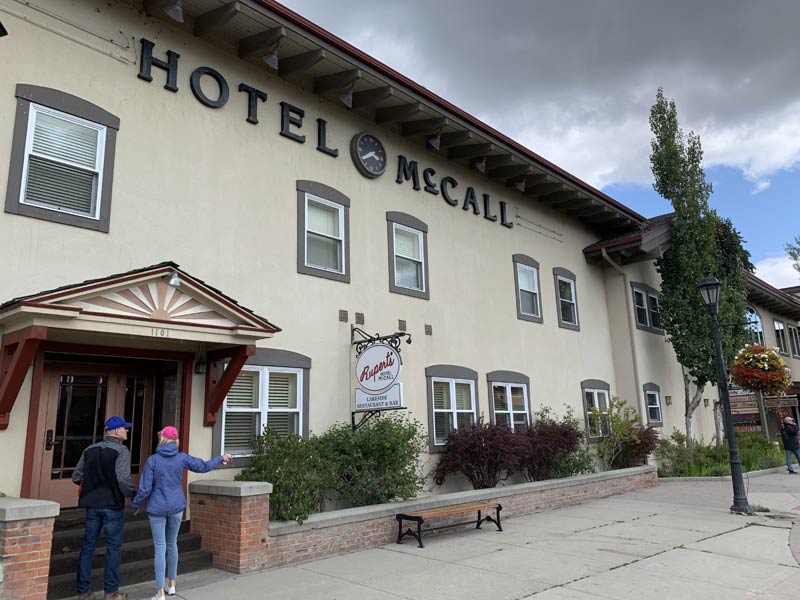 In 1994 American beer drinkers didn’t know the difference between an IPA and an ESB. Most big cities in the nation didn’t even have a brewpub yet, but McCall did.

Located just a couple blocks up the street from Salmon River Brewery, sharing a parking lot with the town’s hardware store, the McCall Brewing brewpub is as comfortable as your oldest, most-favorite blue jeans. Its lodge-like interior features exposed, rough-hewn beams overhead and boot-worn floors underfoot. Atop the building, a rooftop deck provides an alfresco beer and food experience. 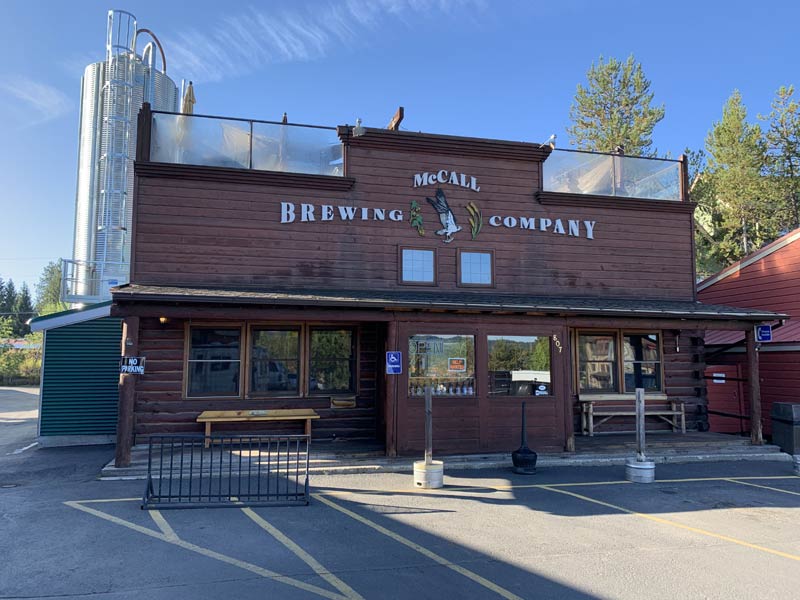 The food menu focuses largely on burgers and sandwiches, with a smaller selection of entrees and salads. People rave about the burgers, like the 1/2 pound McCall Burger that invites you to define your own selection of toppings. I highly recommend the beer cheese soup to accompany whatever else you decide to eat. 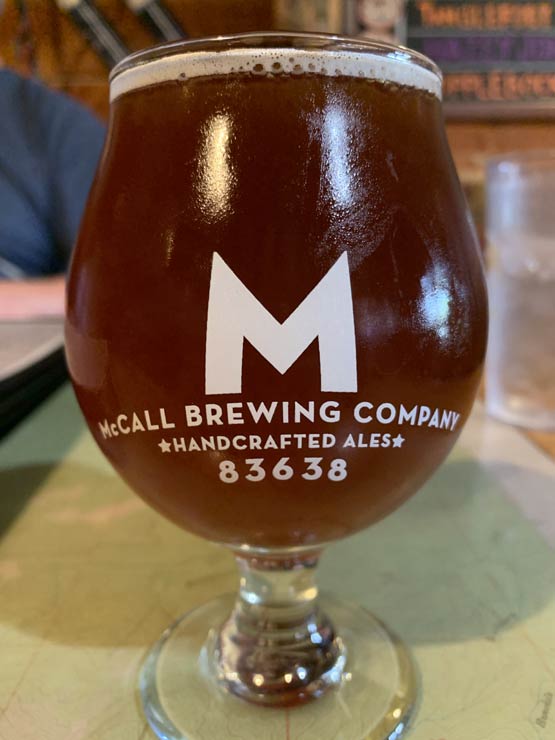 The Overhung IPA is an homage to the days when IPA was actually bitter, not just fruity and aromatic. Not yellow and hazy, but a ruddy brew with a strong malt backbone to support the substantially hoppy body. Hop heads will also appreciate the Hoppy Hippie Pale Ale, while those seeking something a bit different will enjoy the Lemon Ginger Hefeweizen, which uses real lemon zest and real ginger in the boil. Also, if you’re feeling particularly high-spirited, arm wrestle with the Wobbily Man Smoked Scotch Ale.

Not far from downtown (in McCall, nothing is too far from downtown), Broken Horn Brewing operates its brewery and taproom near the local airport. In fact, there’s an unmistakable aviation theme to the taproom, like an overhead fan fashioned from an airplane propeller. 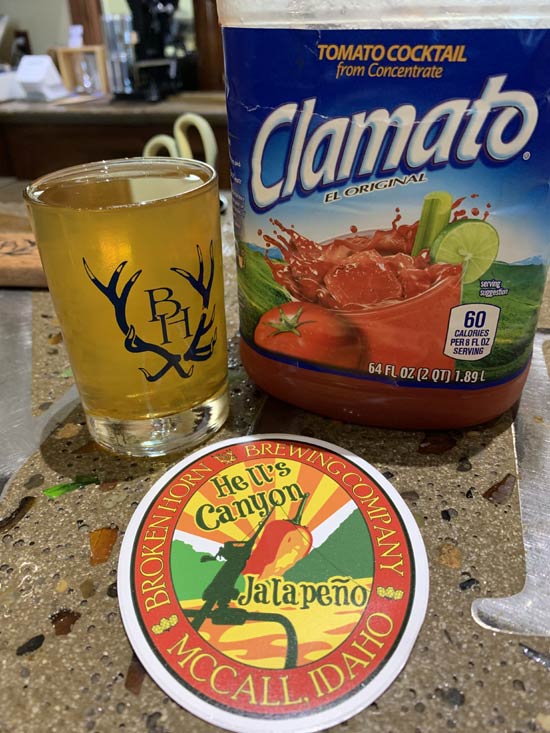 The taproom is beer-only. Meaning, it is not a brewpub and the only food available are some snack-type munchies. There is plenty of beer available, however. It’s a popular after-work hangout, where the local slurp down pints of the Initial Attack IPA and the Extended Attack Double IPA. Both of those beers are named to honor the McCall Smokejumper program, which has provided rapid deployment of wildland firefighting personnel and equipment whenever and wherever it is requested since 1943.

A personal favorite, the Hells Canyon Jalapeno beer is crisp and light with just enough malt body to support the pepper flavor, which is not too explosive. There are some earthy tones to the beer (from the vegetal nature of the peppers) and a creeping heat that does not distract but adds to the flavor of the beer. If you ask your bartender nicely, they might spare you a shot of Clamato juice. I’m not usually a fan of adulterating my beer, but this is an exception. The addition of the juice to this beer results in something remarkably reminiscent of a bloody mary, making this a great breakfast beer, especially when nursing a wee bit of a hangover. There’s nothing wrong with that.

Foresters Club – When the lights dim around town, and the evening wears into the night, be sure to visit The Foresters Club. It is not really a dive bar, but it does have some dive bar charm, like a no-nonsense bartender who you may think is rather surly and unwelcoming at first, but warms up once you’ve settled in at the bar. Place your order with confidence and try not to ask too many questions and you’ll be fine. Expect stiff drinks and a serviceable draft menu. There are a lot of gaming options, some local wildlife, and karaoke night is legendary (Thursdays).

Burgdorf Hotsprings – The word rustic is overused and too often misused, but there is perhaps no better word to describe Burgdorf Hotsprings, which is located about 30 miles from McCall in the Payette National Forest. Make the drive, spend a couple hours relaxing. An ancient, sacred place for indigenous people, the hot, healing waters were discovered by Chinese miners in the 1860s and by 1870 a German emigrant had turned the location into a resort. To some extent, it remains trapped in time and the ageless charm is undeniable. 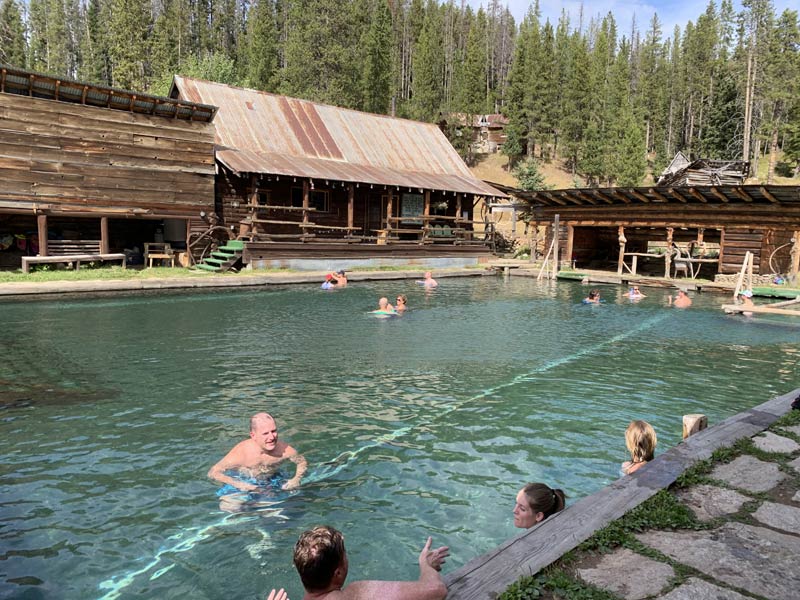 The main, below-ground pool is fashioned out rough-cut timbers and the minerals in the water created a permanent, nature seal decades ago. Known as the lobster pots, two smaller spa-sized pools, each one hotter than the next, are best described as insanely hot and impossibly hot; however, it is worth attempting to endure the heat because the healing power of these waters is miraculous. 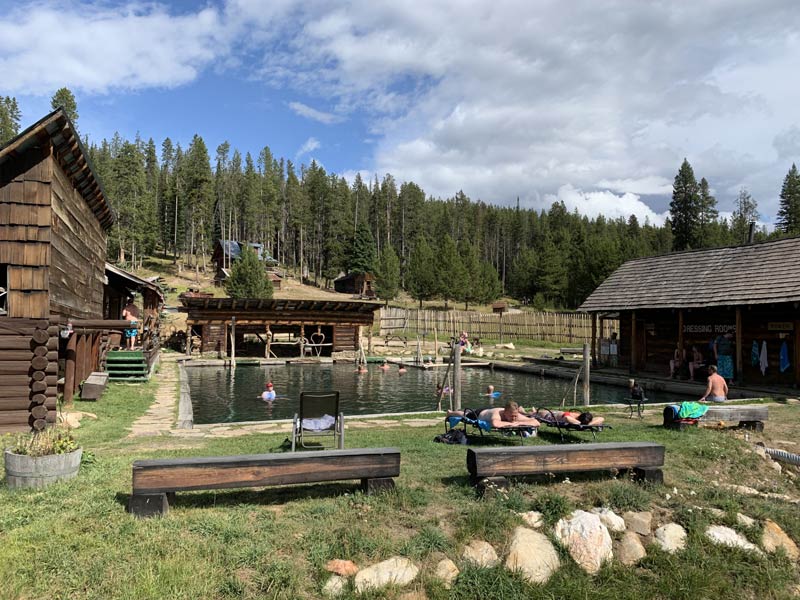 Rustic, yes. Expect ancient cabins, real outhouses, and the welcoming committee of goats and chickens freely roam on the property. The no-alcohol policy is thanks to some snowmobilers who got out of hand last winter. Snowmobiles are the only way to access Burgdorf in the winter.

McCall Lake Cruises – Payette Lake is a gem. It’s a big, beautiful mountain lake that invites all sorts of watersports. If you don’t have time or inclination to kayak, paddleboard, waterski, or windsurf, consider a cruise with McCall Lake Cruises aboard their 65-foot, 85-passenger tour boat, aptly named The Idaho.

Order a locally brewed beer, or other libation, and kick back as the narrated, 90-minute tour educates you about the history of the area. Marvel at the mansions and lush properties that line the lakeshore. While the lake offers a lot of other opportunities for fun and adventure, a relaxing lake tour is a lovely way to see McCall from a different perspective.

I have two breakfast recommendations. For a hearty, belly-busting morning meal and a bottomless cup of java, head to Ruby’s Kitchen and order one of the breakfast bowls. Below, the Bandito Bowl: hash browns, eggs, black beans, caramelized onions, guacamole, chorizo, with sour cream and salsa on the side. Mush it all up and get to work. 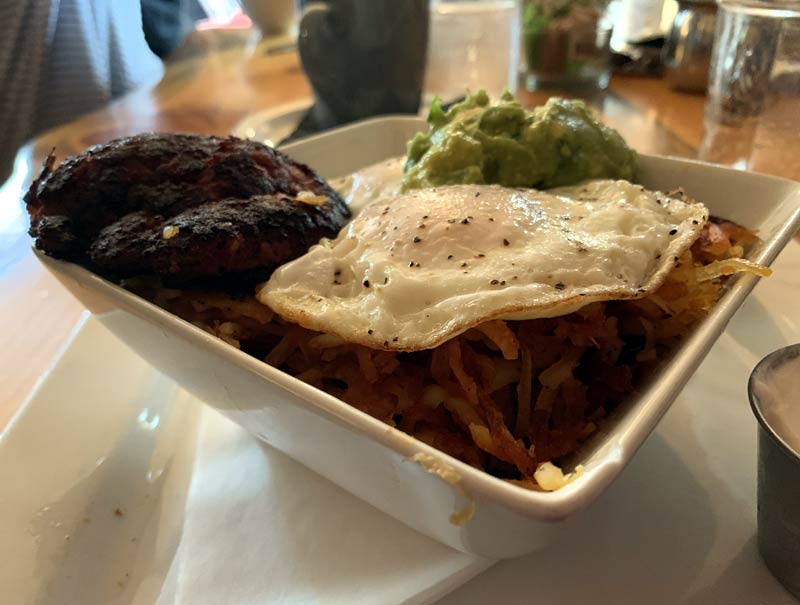 For something a bit less weighty to start the day, head to Stacy Cakes for coffee and pastries. The scones and muffins are wonderful, but there’s nothing wrong with starting off the day with a cupcake either. Don’t be surprised to see desserts from Stacy Cakes on menus at restaurants around town. It is legendary stuff. 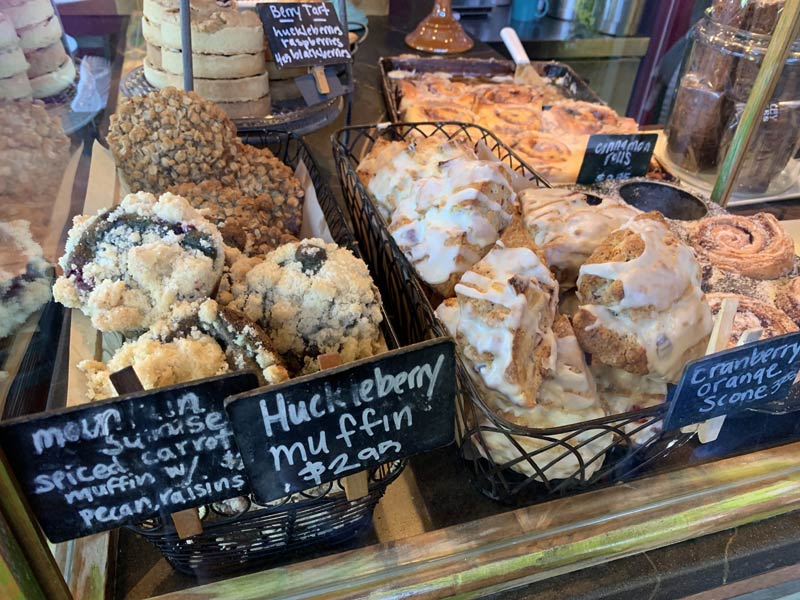 Whether you’re an adrenaline junkie or a leisure lover, McCall, Idaho has a lot to offer. If beer is part of your vacation plan, you’re in luck because this mountain town has more than its share, which is a beautiful thing.

A FOMO-free beer weekend in Portland, Oregon
The Summer of the Beer Garden - our favorite beer gardens of 2020
Enjoying great beers in the great outdoors of Port Townsend, Washington