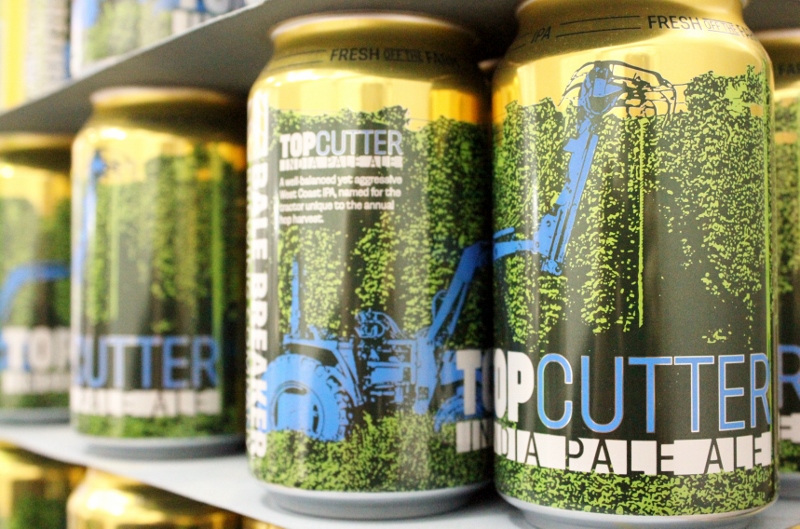 Last September I found myself in Field 41 just outside of Yakima along the road to Moxee. There, I witnessed firsthand the harvesting of hops. I had spent plenty of time in hop fields, wandering amongst the towering rows of hops on warm August evenings, trespassing without malicious intent, but this was my first time witnessing the actual harvest. It was a spiritual experience.

Yesterday the Washington Beer Cruiser returned to Field 41. Our mission was to visit a new brewery and tasting room that is almost ready to open to the public. Bale Breaker Brewing already produces beer, and if you are lucky you might find it on tap around the Yakima area, but the tasting room’s grand opening is still in planning. I’ve been told its a few short weeks away. I will pass along details as soon as they are available. Stay tuned.

A Brewery in Hop Country

The address indicates that Bale Breaker is in the town of Moxee, WA, but you should think of it as the outskirts of Yakima, just two miles east of the freeway on Highway 24. As a beer drinker, there are two things you should know about Moxee. First, you should know how to pronounce it properly: mockSEE, not moxie. Second, you should know that Moxee is the self-proclaimed Hop Capitol of the World. No doubt, this is the center of the universe as far as hops are concerned.

Bale Breaker Brewing is located smack-dab in the middle of hop country, on a real hop farm, occupying a corner of a vast hop field (Field 41). Soon, the bines will begin to wind their way up the trellises and Bale Breaker Brewing will find itself surrounded by a magical forest of glorious hops. Yes, hops grow on bines and not vines.

There is a much, much bigger story to tell about Bale Breaker Brewing and someday you will have a chance to hear me tell it. For now, I offer the highlights. The three minds behind Bale Breaker Brewing are Kevin Smith, Meghann (Smith) Quinn, and Kevin Quinn. Kevin Smith and Meghann Quinn are siblings. Kevin Quinn is Meghan’s husband. Meghann has a background in marketing and promotions, husband Kevin has a background in sales, and brother Kevin is a professional brewer. They all share a profound love for good beer.

To say that Bale Breaker Brewing is a family affair is a serious understatement. Kevin and Meghann’s family have been farming hops on this land for more than 80 years. The brewery is built on the land their family has been working for the last four (and now five) generations. According to their dad, Mike Smith, “Hops are in our family’s DNA.” Kevin and Meghann’s brother, Patrick, is nearby, working the farm with his dad.

Initially, Bale Breaker intends to focus on hoppy beers. I suppose that is not at all surprising. While it enjoys unprecedented proximity to the hop fields, recognize that (for the most part) Bale Breaker finds itself in the same position as any other brewery, having already contracted its hop supply for the next few years.

Kevin Smith was formerly a brewer with Two Beers Brewing (blog sponsor). He describes his beers as dry and hop-forward. Having sampled the Pale Ale, IPA and Imperial IPA, I would concur with his self-evaluation. (In the photo gallery, the picture of the brewhouse, experts may notice the uncommonly large hop back.)

Bale Breaker wants to make sure the local community is the first to have access to its beers, and then they will begin to move east, establishing itself on the other side of the mountains before coming west. There will be some exceptions: the west side will see Bale Breaker at the occasional beer dinner, beer festival, and so on. The beer will be available in aluminum cans and on draft. With a 30-barrel brewhouse feeding 30-, 60- and 90-barrel fermenters, and room to add more, the future should allow everyone to enjoy the beer.

What may end up being Bale Breaker’s flagship beer, Field 41 Pale Ale, is a showcase of hop aroma and hop flavor. An expressively dry-hopped Pale Ale, this beer is crisp, floral, clean, and dry: a hop-lover’s ambrosia. It is a happy beer. A pint full of green and gold smiles.

The Top-Cutter IPA will also send hop heads into a lupulin-induced euphoric trance. A top cutter is a machine used in the hop harvesting process (pictured below). You can learn more about the annual hop harvest by reading the story I wrote last September, when I witnessed the hop harvest firsthand.

You WILL learn more about hops as you learn more about Bale Breaker Brewing and its beers. For instance, the red sign with white numbers that you will come to know as the Field 41 Pale Ale logo, has significance. Signs of a particular color identify each individual hop field. A white sign with red a number identifies a field owned by Loftus Ranches (the Smith family’s farm). Bale Breaker Brewing is located on a corner of Field 41.

It all comes back to Field 41.