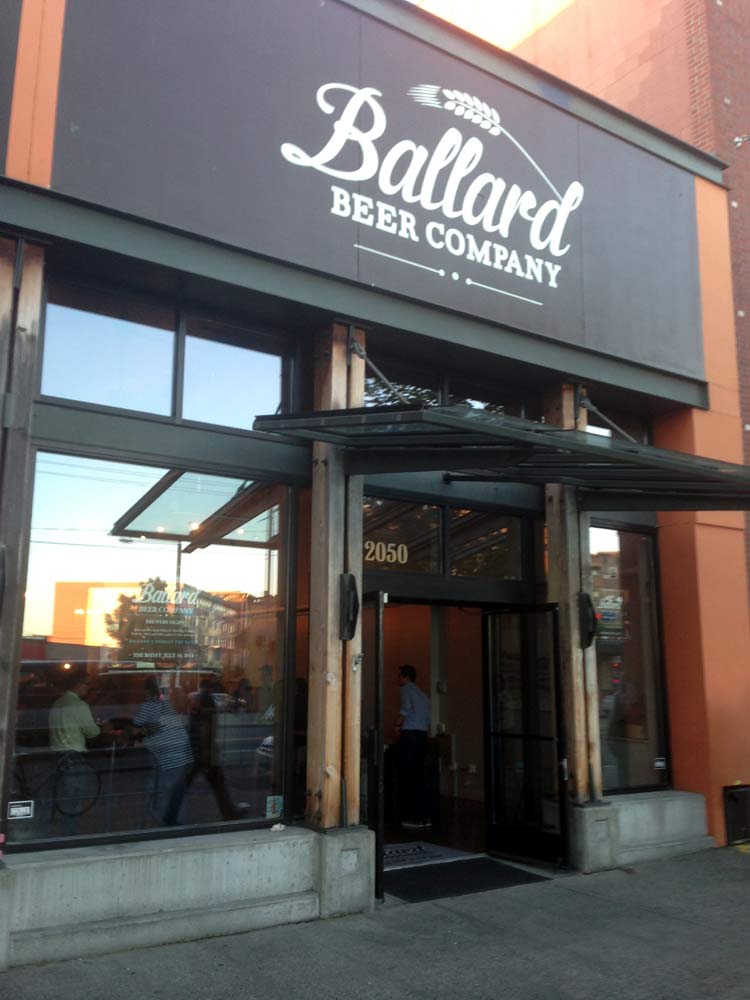 A very wise and clever man once wrote, “Ballard needs another bar like Capitol Hill needs another flannel-clad, button-snapped hipster in Elvis Costello glasses.” An amusing sentiment, but the truth is, with Ballard’s changing demographics and increased population density, there really is room for more places to drink beer. Especially good places to drink good beer.

On Market Street, in the heart of Ballard’s bustling business district, a new beer destination opened for business last night: Ballard Beer Company. The grand opening celebration included visits from some of Ballard’s many brewers, but the crowd seemed happy enough just to have the doors open and the taps flowing.

According to Lindsey Allison, the General Manager at Ballard Beer Company, “We will be featuring beers sourced from the Ballard neighborhood, as well as beers from all over Washington State.” Such tight focus is understandable. After all, there are at least eight breweries in Ballard, depending on where you draw the lines. Last night 10 of the 15 taps were dedicated to beers from the ‘hood. (Be sure to try the dry-hopped version of Maritime Pacific’s Dead Reckoning Pale Ale. Oh sweet baby jeebus it’s good!)

The plan is to incorporate a bottleshop into this beer bar, but no sign of bottles yet, so go to Ballard Beer Company to quaff beers and fill growlers. Most beers are available in 10-ounce or 16-ounce pours. The walls are sparsely adorned with original artwork—sketches of local scenes, like the old building at the Chittendon Locks. Very Ballard. I’m guessing more artwork and possibly some acoustic buffering are part of the eventual plan. For now, Ballard Beer Company is open and pouring. Just in time for this weekend’s Ballard Seafood Fest.

Like the recent proliferation of breweries, Ballard Beer Company is very much today’s Ballard. Last night’s crowd included few lutefisk-eating, Scanderhoovian sons of Leif Ericson. Instead, the audience was young, vibrant and eager to revel in the glory of New Ballard.

I joke about Ballard sometimes. I like to say things like, “I’d love to live in Ballard, but there just aren’t any good bars.” Of course my point is, there are dozens of good bars in Ballard. The neighborhood is changing. By design, the population grows more and more dense. The demographic makeup is changing too. As hard as it is to believe, there is still room for more bars in Ballard, especially ones with such a tight focus on beer. Cheers to Ballard Beer Company! An idea whose time has come.