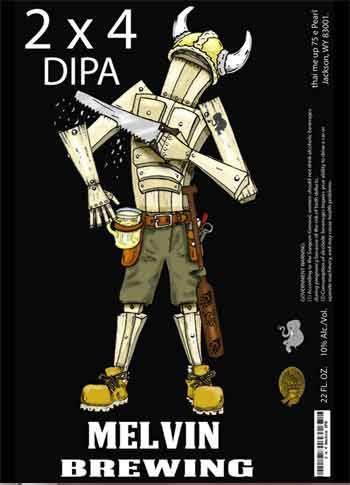 By now, most readers of this blog are familiar with Melvin Brewing of Jackson, Wyoming. Especially you hop heads. The award-winning brewery first started limited distribution in Washington a couple years ago, but hit the Seattle market for real earlier this year.

Today we share news that Melvin Brewing is opening a brewery in Washington. Jeremy Tofte, the owner and beer-loving visionary behind Melvin Brewing, is actually a Washington native. He was born in Mount Vernon and spent his formative youth shredding the slopes at Mount Baker. His love of snowboarding down mountains of dry powder is what led him to Jackson, Wyoming in the first place.

Melvin Brewing intends to open a new brewery and restaurant in Bellingham within the year.

They decided to open the a brewery in Washington to keep up with demand and to re-establish Jeremy Tofte’s roots in the Seattle region. Jeremy grew up in a beer family, working for the family’s beer distribution company. Back in the day, he spent his youth loading trucks, repacking beer, delivering beer, and merchandising store shelves for breweries like Redhook, Pyramid, Grants, and Thomas Kemper. That’s when he became fascinated with craft beer and started home brewing at the age of 19.

Until the new brewery opens, Melvin Brewing will continue to establish its presence around Western Washington.

Earlier this year, Melvin Brewing participated in Sierra Nevada Brewing’s Beer Camp Across America project, collaborating with four other breweries to produce one beer (read about it). Look for Moxie Moron Imperial Session IPA at the big Beer Camp Festival and at other Beer Camp events around town. Also, keep an eye out for the Beer Camp 12-packs.

Melvin also collaborated with Fort George Brewing and Barley Brown’s Beer to create this year’s version of 3-Way IPA. Look for that beer to hit the shelves in the coming weeks.

Keep an eye on Melvin for details as they unfold: