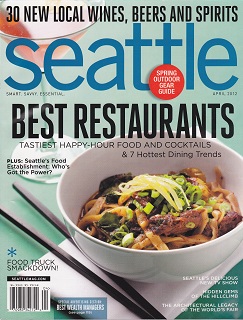 Which brewpub do you think is the best in Seattle? Which brewery do you think is the best in Seattle? The current issue of Seattle Magazine answers such profound questions. Actually, it’s a readers’ choice poll and you may or may not agree with the conclusions. I think they’re quite understandable if not spot-on. That’s only part of the beer-related content. Beyond beer, it is worth your while to find a copy and spend some time reading through the latest issue of the magazine bearing the city’s name.

I suppose mentioning this is rather vainglorious. So sue me. I am honored that the Seattle Magazine editorial staff now refers to me as their “go-to beer guy.” Truth is, regardless of my involvement, I’m happy that such a prominent local lifestyle magazine now boasts having a go-to beer guy. Besides, I did not provide all of the beer content in the April issue. Just some of it. And I fully expect to hear some guff about the things I said and the beers about which I chose to write.

All self-aggrandizing aside, as a beer lover, a foodie, and an aspiring know-it-all when it comes to matters of drinking and eating in this town, I found the April issue of Seattle Magazine to be a wholly enjoyable and informative read. In other words, if you appreciate good food and enjoy adult beverages, this is a must-read. Cool content regarding the 50th Anniversary of the Seattle World’s Fair, too.

The magazine typically refers to the April issue as the annual “Best Restaurants” issue but in actuality it is much more. I don’t want to spoil any surprises, but in addition to best brewpub and best brewery, the magazine’s list of power players in the food and drink biz includes some names from the local beer industry. The article about Washington’s best wines, spirits and beers includes five must-try “new” beers, as selected by me. I ask you to remember that the typical reader is not as sophisticated as you when it comes to beer and the term new has as much to do with packaging and availability as anything else. I stand by my choices. I will name the breweries, you guess the beers (or get a copy of the magazine):  Hilliard’s Beer, Elysian Brewing, Sound Brewery, Schooner Exact Brewing, and Georgetown Brewing.

I understand my audience here on the Washington Beer Blog (that’s you). At least I like to think so. For many of you, Seattle Magazine is probably not exactly a must-read publication and you more likely subscribe to magazines like The New Brewer and Beer Advocate ; nevertheless, this month’s issue possesses a certain quality that I think will be of interest to many of you. It’s like Momma Jonesy used to say: “Sooner or later, everybody’s gotta eat.”

The content contributed by Allison Austin-Scheff, the Food and Dining Editor, is excellent. She’s a rock star. You’ll see her name all over this one. If you are simply looking for opinions about the best local food truck, best barbecue joint, best taco bar, or best hamburger, Allison has you covered. I particularly enjoyed the article about the current state of Seattle dining in general: The 7 Restaurants That Define Seattle Dining Now. Another particular favorite, Happy Places: Best Restaurant Happy Hours. See what I mean? Good stuff to know.