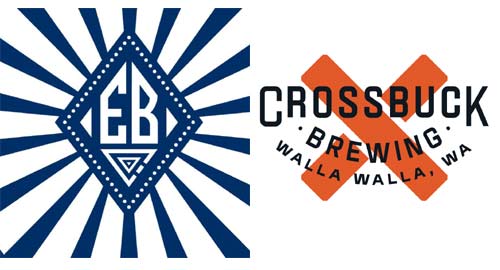 It was just two weeks ago that I told you about two new breweries opening in Washington: Black Fleet Brewing in Tacoma and Crane’s Castle Brewing in Bremerton. Now I share news of another two breweries opening east of the mountains, one in Ellensburg and the other in Walla Walla. Both family-friendly and both with food as well as beer.

Ellensburg Brewing and Malting Company is now open on Main Street in downtown Ellensburg in the the former home of the Moose Lodge. The location is just two blocks south of Iron Horse Brewery’s downtown Pub. It is not just a brewery, rather it is a brewery, cidery, restaurant, and tasting room with a cocktail menu. (Ciders by Tilted Tree Cider.)

The original Ellensburg Brewing Company operated before Prohibition (1907 – 1915) and then again following repeal (1933 – 1937). The new brewery pays homage to history and the walls will feature historic photos of Ellensburg’s beery past, though it is all still a work in progress. Back in the day, the focus at the old Ellensburg Brewing was on German-style lagers. The new brewery intends to honor that tradition but will also brew the kind of beers today’s beer lovers expect, like IPA.

The beer is also something of a work in progress. The brewery is awaiting final approval from the federal government, but Ellensburg Brewing is currently serving some of its own beers (presumably brewed offsite at a licensed brewery) along with guest beers. The restaurant is fully operational.

This new brewery in Walla Wall is located in the renovated, historic train depot. It’s been a restaurant in the past, but is now reimagined into a brewery as well. Crossbuck Brewing is just one block off of the freeway (Highway 12) along 2nd Avenue on your way into downtown. The official opening is scheduled for October 25th.

This is no small venture. The build-out included some massive renovations and additions to the old depot building, like the addition of a whole new, attached building and the addition of an old rail car. See the Facebook page for more pictures, videos, etc of the construction project.

The menu at Crossbuck Brewing includes flatbread pizzas, burgers and other pub-type grub. Currently there are three beers on the menu: a double IPA, a Hazy IPA, and a Kolsch, with more beers on the way. Family-friendly taproom with food, in a historic setting. Cool.