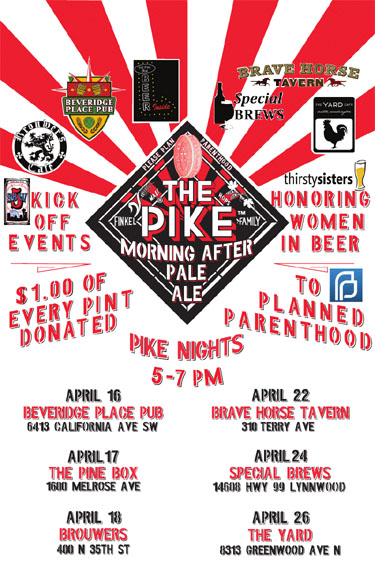 As a prelude to the upcoming Seattle Beer Week celebration (May 9 -19), the ladies of Pike Brewing Company are releasing a special benefit beer, “Morning After Pale.” The first in a series of release events happens tonight (Tuesday, April 16, 5 to 7 p.m.) at the Beveridge Place Pub (blog sponsor). Join Linda Stratton and Laura Stoudt of Pike brewing for a series of launch events celebrating this woman-brewed beer.

For the next two weeks, launch events will take place at a variety of local beer venues. The dates for the release events are below. Each locations will donate $1 from the sale of every pint to Planned Parenthood. In addition, Pike will donate $10 of every keg sold.

Release events for “Morning After Pale:”

As part of Seattle Beer Week this year, Pike Brewing will once again host Women in Beer, a celebration of women working in the craft beer business. This special beer and food tasting event is open to the public, and takes place on Monday, May 13th at Pike Brewing at 5:00 pm. Advance tickets (recommended), available via Brown Paper Tickets.

Last year the Women in Beer event was one of the highlights of Seattle Beer Week. In addition to pouring a lot of beers brewed by women, there will also be a number of vendors at the event: all women-run businesses. We have the list of vendors below.

Note that this is the list of confirmed vendors. There will likely be more added in the weeks ahead. 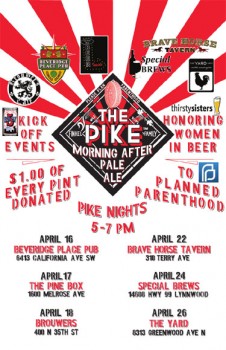