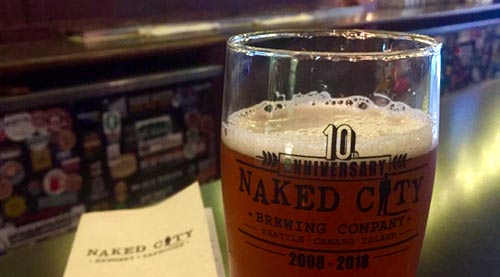 When Naked City Brewery and Taphouse opened in Seattle’s Greenwood neighborhood ten years ago, it helped illuminate a drab and dreary part of the city. Greenwood Avenue North, near the intersection with 85th Street, was a sad strip of road in desperate need of love. Still, people thought Don Webb, the owner and Brewmaster at Naked City, was out of his mind.

“Nobody goes north of 85th,” Don remembers being told. “But there was no craft beer on Greenwood Avenue between the 74th Street Alehouse and The Pub at Pipers Creek (at 105th). That’s over 30 blocks.”

Ten years ago, when Don Webb and his then-partner Donald Averill opened Naked City, few people would have imagined the changes that the neighborhood would see in the coming years. A stretch of Greenwood Avenue North once littered with nothing but dive bars, secondhand stores and dilapidated buildings is now a vibrant and growing neighborhood that will soon realize the benefits of up-zoning. (Benefits? Hot topic, I know.)

There is absolutely no denying that Naked City Brewery and Taphouse helped change the neighborhood when it opened. Quickly, almost instantly, it became a beloved neighborhood institution. The people—including a lot of stroller-pushing parents—came out of the woodwork, excited that at last there was a decent place to get a meal and a drink. Beyond decent, it was really good.

At its core, a brewpub is a restaurant and a ten-year run is pretty damned impressive for a restaurant in this town. Yes, a brewpub is also a brewery, but away from the beer Naked City Brewery and Taphouse is subject to the same economic forces that impact restaurants, and in this town it’s tough to make ends meet for a variety of reasons. If nothing else, there’s more competition in the neighborhood now. While the future promises towering apartment buildings full of hungry, thirsty customers, waiting for the realization of that promise is not an option.

This particular restaurant closing feels a bit more poignant and painful than most. Naked City truly is a community living room. The Screening Room has hosted some amazing events over the years. Not just parties, not just movie nights, not just beer tasting events, but important community events like Humanities Washington’s Think and Drink series of moderated discussions about issues that impact our society.

While there’s no way to ignore the heartbreak and pain of the owners and the employees, the community is also grieving. I was there yesterday afternoon and you could feel the sadness in the air. Almost as if everyone was about to suddenly start sobbing.

Yes, Naked City Brewery and Taphouse is closing in Seattle. What exactly will become of the brewery part of the business remains to be seen. Talking to him yesterday, I realized that Don Webb isn’t ready to think too deeply about that part of the future yet.

After the doors shut in Seattle, they will serve the remaining Naked City beer at the company’s second location on Camano Island: Naked City Camano Island. When asked about the future of that location, Don says that Camano Island is in need of a good taphouse and he intends to continue to offer them a great selection of 20 draft beers.

Here’s the announcement that Naked City shared on Facebook recently:

“After ten magical, glorious years of beer, food, and culture, Naked City Brewery & Taphouse in Greenwood is closing its doors. The last few years have been tough, and the rising costs and rapidly changing neighborhood have created challenges we are no longer able to overcome. All of us at Naked City are grateful for every day of this decade, and for each person who walked into the Greenwood pub. So many beloveds. Through a gas explosion and arson fires, election nights and holiday tree lightings, a love of community has been the beating heart of the Naked City.”

“Come on by to say goodbye, throw some tips at an amazing team of people getting laid off together at the holidays, and pick up some discount merch, bottled beer, wine, and $6 crowlers to go. Don’t miss the official goodbye party on Friday, December 21, from 12pm – Midnight, featuring live music and lots of laughs. Naked City Greenwood’s last day of business will be Christmas Eve, from 11:30am to 4pm. From now until then, all beverages will be $1 off for the Saddest Happy Hour. Naked City Camano Island will remain open for business as usual. As always, and always shall be, Naked City is honored to be your public house.”

Is that Tony Hawk drinking a beer from Seapine Brewing?