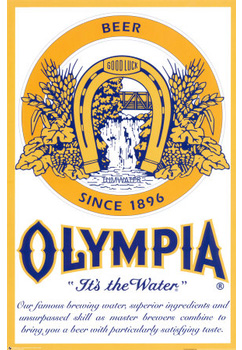 In 2003, the old Olympia brewery in Tumwater, Washington finally closed for good. Save for Prohibition, they brewed beer at that location for 107 years. You youngsters won’t recall, but back in the day Oly was a kind of a big deal, not only around here but across the nation and in pop culture. Oddly, it enjoyed a sort of cult following. It made several “famous” appearances in movies. Clyde the Orangutang drank Oly with Clint Eastwood in Any Which Way But Loose. It’s the beer Dustin Hoffman’s character favored in The Graduate. Kurt Cobain wore an Olympia Beer T-shirt. Yada yada yada. Last I heard, Olympia was still popular in Japan. Go figure. Today the brand is owned by Pabst and is one of many beers brewed in Irwindale, California at a Miller facility that is larger than most Central American nations.

My point? the Olympia area has a proud brewing tradition that predates Fish Brewing.

The brewery has been closed for a decade and the old Rainier vs. Oly days are long gone, but the local tourism and convention bureau doesn’t want you to forget about Olympia’s and Tumwater’s proud brewing history. To that end, they are organizing a new beer festival: Tumwater Oktoberfest. The event will take place on September 7th at the Tumwater Valley Golf Course driving range.

The event is a joint effort by the Visitor & Convention Bureau and the city of Tumwater. We’ll have more details for you as we learn them. In the meantime, read the story in today’s Olympian.