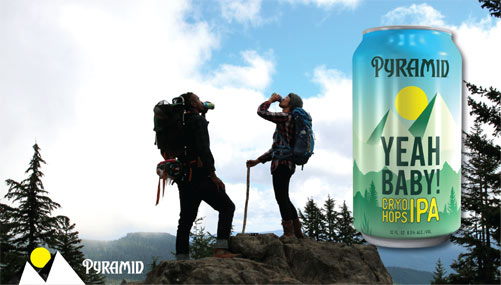 Pyramid Brewing is releasing a new beer brewed with CRYO Hops: Yeah Baby! CRYO-Hopped IPA. This is a new addition to the full-time, regular lineup of beers from Pyramid, available in six packs of 12-ounce cans and on draft at bars and restaurants in Washington, Oregon and across the West.

To introduce the beer, the brewery is hosting a launch party at the Pyramid Alehouse in Seattle on Tuesday, October 23rd starting at 4:00.

So, what is a CRYO-Hopped IPA?

More than ever before, IPA drinkers demand heavily hopped, aromatic, floral, citrusy, piney beers. Brewers are happy to oblige, of course, but there are issues that must be addressed when creating these 100 megaton hop bombs. The humble little hop flower is beer’s most expensive ingredients, for example. Also, when used in copious quantities, and without care and attention, hops are somewhat volatile and can create off-flavors in beer. The dreaded Enzymatic Hop Creep is nobody’s friend.

Don’t fear! CRYO Hops are here! This new product from Yakima Chief Hops is the result of a proprietary process by which hops are frozen to extremes and turned into resins and oils (powder and super-concentrated oils). That’s a simplified explanation, but the point is the process creates concentrated hop products that possess the super-floral, ultra-aromatic qualities you love in your beer while at the same time minimizing some of the unintended consequences of profound hop usage.

The process of creating CRYO Hops is new and exciting beer technology. In the past, many people frowned upon the concept of hop extracts. Well, this is different. You want super-hoppy beers and that’s what you’ll get, damn it! Welcome to the 21st century.

Are other breweries using CRYO Hops? Yes. Have they sent me press releases about it? No.

“Yeah Baby! is inspired by the moment when all of your hard work pays off. To me, it’s reaching the peak of a mountain after a long hike. A chance to take in an epic view signaling your success, joy and excitement,” said Lead Brewer Ryan Pappe. “Everyone’s “Yeah Baby!” moment is unique, but we feel this IPA is a great way to celebrate your accomplishment in that moment.”

The beer is described as having a tangerine-like color and a smooth mouthfeel from Red X specialty malts. It brings balance to the tropical and citrus hop flavors with the late addition Denali hops and double dry-hopping with the Ekuanot CRYO-Hops, Amarillo and Calypso hops.

“Creating a CRYO-hopped IPA follows with Pyramid’s affinity for expanding upon different flavors within our IPA family,” said General Manager Robert Rentsch. “With such broad availability this beer is perfect for any outdoor activity or adventure, whether a fall hike or game day at our Alehouse in SoDo.”

For more information about the release party, the beer, and Pyramid Brewing in general, follow along…

Born in the Pacific Northwest, Pyramid Brewing Co. crafts some of the PNW’s favorite brews from its year-round ales and lagers to the seasonal and Brewer’s Reserve series. In 1984, Pyramid discovered a new way of crafting beer, bringing together adventure, friends and bold new flavors and innovation. Today, Pyramid shares this spirit through its craft beers, and at its breweries and alehouses in Seattle and Portland. Pyramid Brewing Co. is part of the North American Breweries (NAB) family of breweries and brands with a purpose. To find your Pyramid, visit: www.pyramidbrew.com.