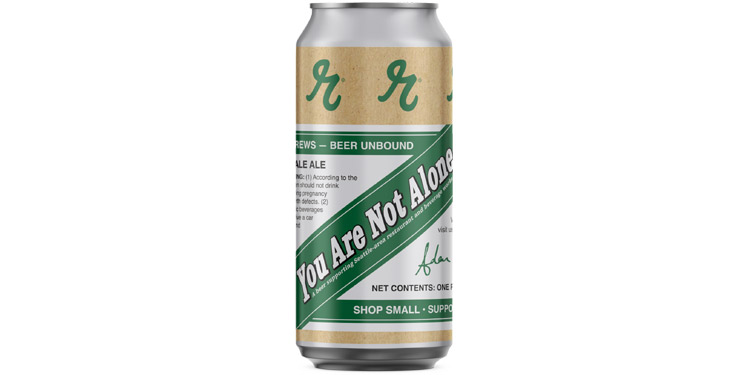 Workers in the hospitality industry were hit particularly hard by the pandemic shutdown. Around the Seattle area alone, thousands upon countless thousands of workers suddenly found themselves out of work in an instant. Reuben’s Brews created a new beer that benefits Big Table, an organization providing support to struggling food and beverage industry workers.

You Are Not Alone IPA was brewed last weekend and is scheduled for release on April 16th. It will be available around the Puget Sound region thereafter. The beer is described as a hazy IPA that weighs in at 8.5 percent ABV. More info about the beer and the mission in the announcement below.

You Are Not Alone!

Seattle, WA (4/1/2020) – In a world where social distancing has become the new normal, it is essential for us to remember that we’re all in this together. That is especially true for the thousands of hospitality industry workers in Seattle and the whole of the Pacific Northwest who have been impacted by this shutdown and are struggling to make ends meet until they can get back to work.

To do their part in this time of need, Reuben’s is brewing a special new beer called You Are Not Alone. This is a beer with a purpose, and 100% of the profits will be donated to Big Table (https://big-table.com) who is providing support to those in our industry who have lost their jobs.

“Like everyone else, Reuben’s has truly felt the effects of this shutdown,” said Reuben’s Co-Founder and Brewmaster Adam Robbings. “We’ve been able to keep our team employed and the lights on by selling beer to-go at our Taproom as well as producing for stores throughout the region, but others in our industry have not been so lucky. We believe we have the responsibility and the opportunity to support people across the industry right now, and this is just one small thing we can do to try to help.”

The new beer was brewed last weekend and will be released around April 16 (or whenever the beer decides it is ready). It will be an 8.5% ABV hazy IPA featuring spelt – one of Reuben’s favorite grains that adds creaminess and mouthfeel to their hop-forward beers. Another interesting note about the beer is the label, which craft beer fans may recognize as an homage to a certain little digestif bottle that warms the hearts of people in breweries and bars around the world.

Additionally, Reuben’s is putting the call out to any other brewery that is able to brew their own You Are Not Alone beer and donate what they can from the proceeds to a charity of their choice. So far, three other breweries have committed to doing their own version of You Are Not Alone – and they are hoping this list grows. Reuben’s is making the template for the beer’s label available to anyone for customization and use on their version of the beer. Brewers are invited to contact Reuben’s directly to discuss recipes and to get the label file.