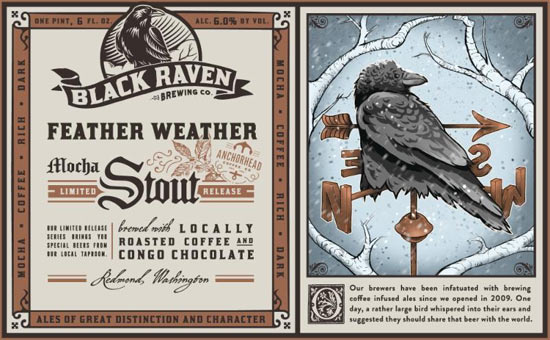 But first, a word about coffee beer, which is probably a more popular beer style than you realize. At the 2016 Great American Beer Festival, the beer judges tasted 168 different entries in the Coffee Beer category. Only American India Pale Ale saw more entries (312). Winning a gold medal in either of those categories would be very impressive. Winning a gold medal in both would be extraordinary. Georgetown Brewing did it, bringing home gold for Bodhizafa IPA and Gusta Crema Coffee Ale.

Here are the release notes I promised from Black Raven Brewing:

A new beer from us in our popular Blackfeather Series of beers. The Feather Weather is an American stout brewed with Theo’s cocoa nibs and Anchorhead cold pressed coffee. Dark chocolate and coffee flavors, balanced to the drier side of stout rather than the sweet.

On draft, growler fills and 22oz bottles to go.

This beer will also be distributed into the market and be available during the months of January, February and early March.