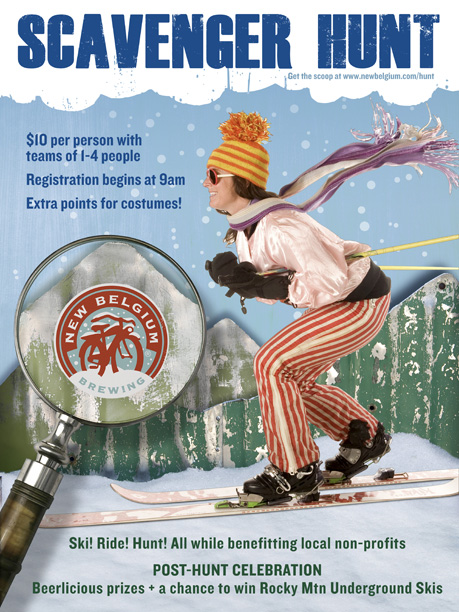 Attention all skiers, snowboarders, outdoor enthusiasts, beer lovers and supporters of KEXP. For the first time, New Belgium Brewing brings its winter scavenger hunt to Washington. The event takes place Sunday, April 1st at the Summit at Snoqualmie. Once the hunting is done, a big party at the lodge ensues. Proceeds from the event benefit KEXP, a local listener-supported radio station and arts organization that the Washington Beer Blog heartily endorses and regularly supports.

Participating teams of two to four people scour the mountain in search of moving and stationary clues. Be sure to wear your funkiest, wackiest or weirdest outfit. The first team to answer all of the clues is the winner. A big New Belgium party follows at the lodge. Prizes for the top honors will be awarded. Entry costs $10 plus your lift ticket.

Here are the details from New Belgium:

Ft. Collins, CO – March 26, 2012 – New Belgium Brewing’s favorite winter tradition is coming to The Summit at Snoqualmie for the first time. The New Belgium Scavenger Hunt Series will arrive in Washington on Saturday, April 1 with riddles, scavenging and fanciful costumes. This stop marks the fifth of six scavenger hunts, with the final stop in Squaw Valley, CA.

“This is the perfect way to get in some final runs on the slopes,” said Shawn Hines with New Belgium Brewing. “There is no better to way to take advantage of a day on the mountain than with a little friendly competition while donning your best costume. Of course everyone also loves kicking up their boots at a big ol’ apres’ ski party.”

To participate in the hunt, you need a group of two to four people. You’ll then be tasked with searching the mountain for moving and stationary clues, which focus on New Belgium beer and culture, sustainability, the ski resort hosting the hunt and the benefiting nonprofit. The answers vary from easy to difficult and the team to answer all the clues first is crowned that mountain’s 2012 winner. It costs $10 to enter the scavenger hunt, plus the cost of your lift ticket, and all proceeds will go to a local nonprofit. At The Summit at Snoqualmie stop the nonprofit is KEXP 90.3, a radio station and arts organization that provides rich music experiences on the air, online, and on the streets.

Registration starts at 9 a.m. with the scavenger hunt running from 10 a.m. to 3 p.m. Prizes and top honors will be given out at the post-party, held from 3 p.m. to 5 p.m. The post-party will also include a pair of Rocky Mountain Underground custom-made Fat Tire skis.

For more information, check out http://www.newbelgium.com/events/scavenger-hunt.aspx.