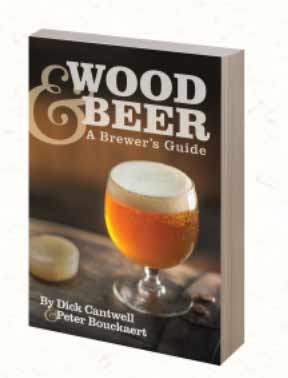 Barrel-aged beers are all the rage these days, which is understandable given the pleasant effect wood-aging has on beer, but do you really understand the art and science behind wood and beer? The Brewers Association just announced the release of a new book that provides all the information you need on this topic.

Wood and Beer: A Brewer’s Guide was co-authored by local brewing legend Dick Cantwell, formerly the brewmaster at Elysian Brewing, and Peter Boukaert, the brewmaster at New Belgium Brewing. Below, more information from the Brewers Association about this new book.

Boulder, CO • April 26, 2016 – The use of wooden vessels for storage, transportation, fermentation or aging of beer is deeply rooted in history. The latest release from Brewers Publications, Wood & Beer: A Brewer’s Guide by brewing luminaries Dick Cantwell and Peter Bouckaert, explores the many influences of wood as a vehicle for contributing tremendous complexity to beers fermented and aged within it.

Brewers are innovating, experimenting and enthusiastically embracing the seemingly mystical complexity of flavors and aromas derived from wood. From the souring effects of microbes that take up residence in the wood to the character drawn from barrels or foeders, Wood & Beer covers not only the history, physiology, microbiology and flavor contributions of wood, but also the maintenance of wooden vessels.

“Two of my brewing idols have created an indispensable brewer’s guide to understanding and using wood in the production of beer. Peter Bouckaert and Dick Cantwell have painstakingly collected and skillfully weaved together an impressive wealth of information and experience that brewers of any level will find intriguing,” said Matt Brynildson, brewmaster, Firestone Walker Brewing Company. “This is the book that I’ve been looking for since that life-changing first taste of barrel-aged stout, which altered my brewing path forever.”

Cantwell is among the most well-respected and experienced craft brewers, co-founding Elysian Brewing Company in 1996, where he served as head brewer until its sale to Anheuser-Busch in 2015. During his tenure, Elysian was named Large Brewpub of the Year three times at the Great American Beer Festival® (1999, 2003 and 2004). Cantwell has written two previous titles for Brewers Publications, Barley Wine with Fal Allen and The Brewers Association’s Guide to Starting Your Own Brewery, Second Edition.

Prior to relocating to the U.S. in 1996 to become New Belgium Brewing Company’s brewmaster, Bouckaert brewed for a decade at Brewery Rodenbach. Bouckaert was an early advocate of brewing hoppier beers outside the Belgian tradition, exploring IPAs, Czech-style lagers, fruits, spices, wood-aging and fermentation, and experimenting with yeast and microbe strains from around the world. He earned the equivalent of a Master’s degree in brewing and fermentation technology from the University of Ghent, Belgium, as well as a Quality Engineer degree from CKZ Kortrijk. His mantle includes awards from World Beer CupSM and Great American Beer Festival® and a handful of other beer accolades.

Brewers Publications supports the mission of the Brewers Association by publishing books of enduring value for amateur and professional brewers as well as titles that promote understanding and appreciation of American craft beer. With over 50 titles to choose from, it’s the largest publisher of contemporary and relevant brewing literature for today’s craft brewers, homebrewers and beer enthusiasts.

Watch and learn more on the Brewers Publications website.