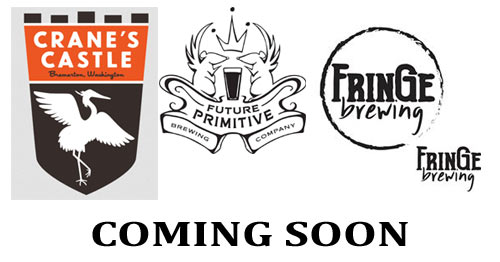 Every now and again I check with the Washington State Liquor and Cannabis Board to find out about new liquor license actions that pertain to breweries. Or, as the state calls them, microbreweries. Basically, I am looking for new applications and significant changes to existing licenses. Below I share the fruits of my latest endeavor.

Armed with this information from the state, I seek out more details. Sometimes I find more details, sometimes I don’t. Some of the info below is news to me, some of it is not. Probably the same for you.

Logsdon Farmhouse Ales – The award-winning brewery from Hood River, Oregon is expanding and opening a brewery and taproom in Washougal, Washington. The news originally showed up on Facebook a couple months ago, but the licensing action showed up recently. They are assuming the space formerly occupied by Amnesia Brewing. Alex’s Barbecue operates at this location and the brewery will partner with them to provide food. This new location will allow Logsdon Farmhouse Ales to increase production as they continue to brew beers on David Logsdon’s farm in Hood River. http://www.farmhousebeer.com/

Future Primitive Brewing in White Center – This highly anticipated brewery, founded by a group of local beer industry legends, keeps inching closer to opening in the former home of Big Al Brewing. Thing is, I’ve driven by and you’d hardly recognize the place. We will certainly share the news once we know a realistic opening date. They’re working on it. More tanks and the mill showed up today. https://www.facebook.com/futureprimitivebeer/

Whipsaw Brewing in Ellensburg has assumed control of the old Iron Horse Brewery location on Prospect Street. The original home of Iron Horse Brewery. Whipsaw is expanding production with a 15-barrel production facility at the location. They’ll still serve beer (and brew beer) at the location on Wenas Street. https://www.facebook.com/whipsawbrewing/

Dirty Couch Brewing in Seattle has secured a new home in the Interbay/Magnolia area for an expanded brewery and an all-ages taproom. We will keep you posted as the plan comes together and an opening date is in sight.  https://www.facebook.com/DirtyCouchBrewing/

Crane’s Castle Brewing in Bremerton – The location is just off of Highway 303, on Riddel Road. It will be a brewery with taproom. Plans are to open this fall. Stay tuned. https://cranescastlebeer.com/

FrinGe Brewing in Ferndale – The downtown location in the former home of the Ferndale Police Department will be a brewery with a taproom, with room for food trucks out front. Plan is to open in October. Stay tuned. https://www.facebook.com/FrinGebrewery/

Black Fleet Brewing in Tacoma. Brewery, taproom with food. Not yet open, but according to reports the first batches of beer went into the fermenters back in late July. Location is downtown, on the south end of Fawcett Ave. We will keep and eye on this one.  https://www.facebook.com/BlackFleetBrewing/

Snap Shot Brewing in Seattle. The address places it on Greenwood Avenue in the Phinney neighborhood. That’s all we know for now and will share more as we learn it. No word about opening dates. No information found online.

Dub Town Brewing in Renton. The liquor license application puts this one on Main Street in downtown Renton. Not too far from The Berliner, a German-focused pub with which you might be familiar. No word about opening dates. No information found online.

Masters Brewhouse in Deer Park. Address is in a strip mall in the small town of Deer Park, about 15 miles north of Spokane. No word about opening dates. No information found online.

Bees Knees Brewing in Elma has applied for a microbrewery license. The address puts it in the heart of downtown Elma, which is located between Olympia and Aberdeen. That’s all we know. No word about opening dates. No information found online.

Neon Brewing in Kent. A residential address, located in a neighborhood. In all honesty, only about 25 percent (if that) of these residential applications come to life as commercial breweries. No word about opening dates. No information found online.

No about something I missed? Don’t be afraid to share in comments below.