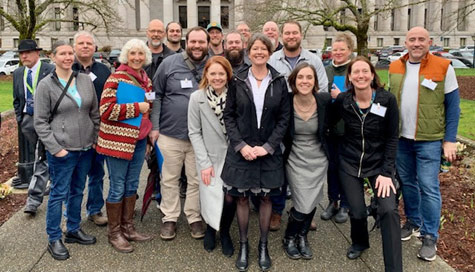 We are excited to report that our Washington Brewers Guild (WBG) priority bills have all been passed by the Legislature and are on their way to Governor Inslee for his signature!

Legislation goes into effect 90 days after receiving the Governor’s signature. We will be providing more information about how these new laws will be implemented soon, but until then, here is an overview.

We want to thank the many people who contributed to the successes this Session. Special thanks to our Board of Directors, Government Affairs Committee, Hill Climbers, our contract lobbyist (TK Bentler), and the many, many of you who contacted your legislators about these bills! We also want to thank our bill sponsors, Rep. Monica Stonier (Vancouver), Rep Joe Fitzgibbon (West Seattle), and Senator Dean Takko (Long Beach).

On behalf of our team at the WBG, thanks to ALL of you for your contributions to this industry. You are creating jobs, delivering tremendous economic impact for our state, making high quality and tasty beverages from ingredients grown here in WA, giving back to local charities and providing gathering spaces in communities all across Washington. We love getting to represent this amazing industry!