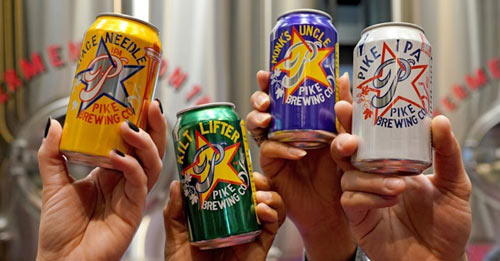 Not too long ago we shared news that Pike Brewing was introducing a new design element—the star P—that would make its debut on the company’s new cans. The venerable Seattle brewery introduced the design work back in August, which we covered here. Today the company announced that the newly released can are now available. Look for them wherever better beer is sold.

Long-time Pike fans will recognize the new design’s through-line. “The star, as well as the sweeping font, have been part of the Pike brand since its inception, appearing on labels since 1989,” says co-founder and logo designer Charles Finkel.”We modernized our packaging while maintaining a connection to our our history. Rose Ann and I are proud that Pike Brewing Company continues to grow and evolve, as the goal is for Pike to become a 100-year-old independent brewery.”

Shop Pike’s new cans at The Pike Pub and markets and bottle shops throughout Washington.