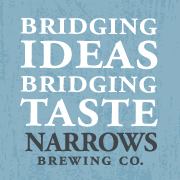 We’ve been waiting with bated breath. Finally, we have something to tell you. Narrows Brewing Company will host its Grand Opening celebration on Friday, July 12th. Opening weekend details can be found below. Tacoma’s newest brewery is located at the Narrows Marina – 9007 South 19th, Tacoma, WA. Map. Complete press release and photos below.

According to the website, “Six friends have come together in the historic Narrows Marina to create a new interpretation in craft beer. Their icon is the Tacoma Narrows Bridge and their inspiration is the rich heritage and folklore of this maritime region. Bridging the old and the new, the classic and the innovative, the historic and the modern, the casual and the sophisticated. Narrows Brewing is making these connections, and for the discovery minded craft beer enthusiast, it is an amazing find in an iconic setting.”

The brewer at Narrows Brewing Company is Joe Walts. He formerly brewed at Ale Asylum in Madison, Wisconsin. Note: the brewery tells me that the opening day lineup will include a Golden Ale, a Pale Ale, and an IPA.

Here’s the schedule for opening weekend.

June 18, 2013 (TACOMA, Wash.) – Set against the scenic backdrop of the iconic Tacoma Narrows Bridge spanning the Puget Sound, Narrows Brewing will open the doors of its destination brewery in mid-July. Located in the historic Narrows Marina, Narrows Brewing will offer innovative tastes, breathtaking views and several nods to local folklore and cultural heritage. The brewery will call upon the experience of Master Brewer Joe Walts, who will oversee the careful crafting of Narrows Brewing’s signature beers, including an IPA, a refreshing pale ale, and a rich gold, meticulously cultivated in the on-site state-of-the-art brewery.

“Narrows Brewing is bridging innovation and tradition,” says Co-owner and General Manager Scott Wagner. “We’re a cutting-edge brewery housed in a 100-year-old building, with a look that blends modern and classic design, and a taste that melds bold and subtle tones and textures. Narrows Brewing is forging new connections for an experience you’ll never forget.”

The unique 9,000-square-foot site of Narrows Brewing, 9007 S. 19th St., Suite 200, opened as a lumber mill in 1912 and was converted into the Narrows Marina in 1949. The space has undergone a dramatic renovation and now boasts a 15-barrel (bbl) Premier Stainless System.

The 55-foot long main bar is made with reclaimed wood from the original Day Island Bridge, formerly situated nearby.  Upon completion, three tap rooms, each exuding a distinct personality, will allow professionals, travelers, locals and brew connoisseurs to relax and enjoy a casual, distinctive ambiance punctuated with the distinct taste of expertly crafted beer. Additional beverages and light snacks will also be offered, as will “Growlers to Go,” perfect for boaters using the marina’s public dock space.

“Those who have been accustomed to drinking beer without a lot of depth, character or flavor will really appreciate Narrows Brewing’s craft of creating a really great beer,” says Wagner. “And those who consider themselves aficionados of the very best will be absolutely blown away. We invite everyone to come in and find out for themselves!”

Six friends with a goal of creating exceptional craft beers and an extraordinary place to enjoy them founded Narrows Brewing in 2013. They are inspired by the bridge that unites the region, which represents their shared passion for the art of crafting and experiencing beer. For more information, visit www.narrowsbrewing.com.

CANCELED - Beer releases, Women in Beer, and other news from Pike Brewing Company
Liquor and Cannabis Board: Help for Licensees During COVID-19 Restrictions
Portland's Cascade Brewing has been sold