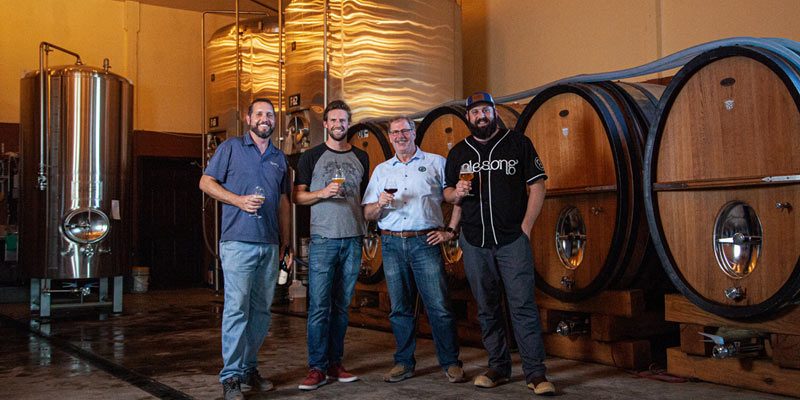 Beginning in November, beers from Alesong Brewing & Blending will be available across Ninkasi Brewing’s distribution network. The arrangement will allow for the wider availability of a limited amount of Alesong’s beers.

Alesong Brewing & Blending focuses on barrel-aged beers, so none of their beers are available in large quantities, but the arrangement with Ninkasi will make beers from this award-winning brewery accessible to a larger audience.

This partnership will begin with Alesong’s Rhino Suit, available starting in November.

EUGENE, Ore.—Ninkasi Brewing Company has partnered with Alesong Brewing & Blending to distribute limited quantities of Alesong releases across Ninkasi’s distribution footprint. This arrangement will begin November 2019 with Alesong’s Imperial Milk Stout, Rhino Suit, and on an ongoing basis with one or two releases per quarter. Rhino Suit will be available from all local and regional Ninkasi sales representatives.

“We’re ecstatic to be partnering with Alesong to distribute their phenomenal product within our channels,” said Ninkasi National Sales Director Marty Compton. “Alesong is a great complement to Ninkasi and we’re excited to bring more great options to our distribution network.”

Located in Southern Willamette Valley wine country, Alesong was founded in 2015 by brothers Brian and Doug Coombs and veteran brewmaster, Matt Van Wyk.  Alesong focuses exclusively on brewing and blending barrel-aged beers and has won multiple awards from the Great American Beer Festival®, Best of Craft Beer Awards, and Oregon Beer Awards for their blends across a wide range of styles: from big and bold, bourbon barrel-aged imperial stouts to complex and refined, blended sour beers co-fermented with wine grapes.

“We’ve been friends with the team at Ninkasi for years and couldn’t be more excited to be partnering locally with someone that really understands what we do” said Doug Coombs, Alesong Co-founder.  “A brewery of our size making 100% barrel-aged beer would never be able to build a sales and distribution network like Ninkasi’s, so we’re thrilled to both improve our presence in the marketplace and at the same time be able to focus more on the beer.”

This year’s rendition of our imperial milk stout was matured in freshly emptied Heaven Hill bourbon barrels to add velvety layers of vanilla and coconut to the sweet and chocolatey malt flavors of the base stout.