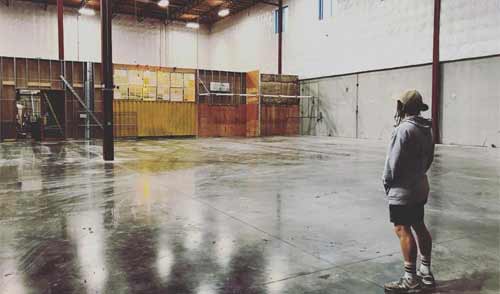 Pictured above: the space that will house the expansion at No Boat Brewing (via their Facebook page).

No Boat Brewing just announced it’s much-needed plans for expansion. We share the official announcement below.

The brewery began serving beer to the thirsty community of Snoqualmie Ridge in 2016. The brewery, taproom and oddly comfortable beer garden, which is really just a cleverly disguised parking lot, were immediately embraced by the local residents of the surrounding masterplan community who were, it seems, starving for a retail business with some character. And beer, of course.

Since the beginning, David Skiba, the head honcho at No Boat Brewing, has struggled to keep up with demand for his beer, producing just enough for the crowds at the taproom, but generally unable to distribute beer beyond the brewery’s four walls.

Here’s a quick aside about the name. David told me that before No Boat Brewing came to life, he and his father were discussing the idea of opening a brewery and, of course, they eventually started talking about funding such an endeavor. One of them quipped, “Well if we had a boat, we could sell it.” But, alas, they had no boat.

One of my favorite things about No Boat Brewing is that you can sit in the beer garden and gaze at yonder mountains as you nurse a beer, resting your weary feet after one of the many nearby hikes, like Mount Si, Rattlesnake Ridge, Mailbox Peak or any of the other nearby, personal favorite hikes that I won’t mention because I don’t want them to become as crowded as the hikes that I did mention. The brewery is just a few minutes off Interstate 90 at milepost 25 and you’ll often find a food truck waiting for you.

“We’re incredibly excited to announce that No Boat is expanding! Over the next several months and years our new space, alongside our current taproom and brewhouse, will grow into a house for barrels, new tanks and brewing equipment, and perhaps a few other surprises. This will allow us to greatly expand our wood-aged and wild ale programs in addition to growing our current styles. We could not be more excited about this next step and are incredibly invigorated to get to work. We’ll keep you all updated as things progress!”

Congratulations to the crew at No Boat Brewing; I know they’ve been working on this for a while now.