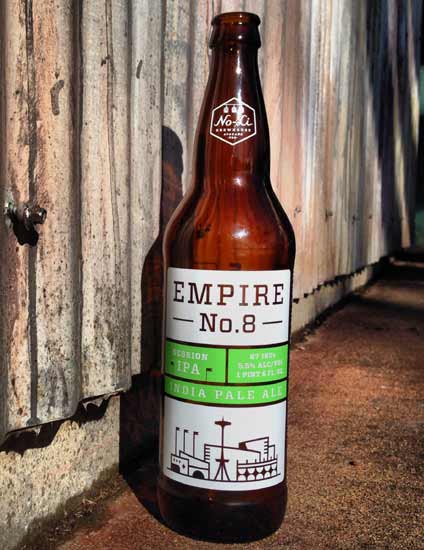 Hop Aboard the Empire No. 8: No-Li Releases New Session IPA

Spokane, WA… Keeping up with market demand and at the forefront of innovation in the Pacific Northwest, No-Li Brewhouse is laying down the rails for Empire No. 8 Session IPA, launching in February.

No-Li decided to add this lighter-style IPA to its year-round line-up to offer customers a lower alcohol beer that’s still packed full of hop flavor. The Empire Builder is a train that brings people thirsty for adventure to the Pacific Northwest, passing through Spokane, Seattle and Portland. At 5.5% ABV and 67 IBUs, Empire No. 8 is perfect for bringing along and enjoying on all of your adventures.

The bottle reads, “The No. 8 rail-line brought people thirsty for adventure to Portland, Seattle and Spokane. Just like the rail-line, this Spokane-Style Session IPA brings people together. This hop-forward beer’s light malt body lets the grapefruit & citrus notes shine through. All aboard the Empire No. 8!”

“While road-tripping around the country visiting other markets, we found different sessionable beers that satisfy the want for full flavored beers, without as much alcohol-punch. We put together the beer-style inspiration with our Northwest brewing style, and came up with our own twist on the Session IPA,” says No-Li National Sales Manager, Dylan McDonald.

“The Session IPA is a style many breweries are diving into, but we put our own Spokane-Style twist on it; here at No-Li, with our Inland Empire roots, our motto is to brew with ‘No Boundaries.'” says Lead Brewer, Damon Scott.

“Session IPA’s are perfect for everyone; those who venture into the outdoors, enjoy tailgating at sports events, kick back and relax after a hard days work. The combination of full-flavor and low alcohol make the beer more approachable and something everyone can enjoy,” says Marketing Director, Brittany Dern.

Empire No. 8 is now available on draft, and will be available in 22 oz bottles starting in late February.

In addition to the state of Washington, No-Li is distributed in select states, including Idaho, Oregon, Alaska, Colorado, Ohio, Maryland, Delaware, Washington, D.C., North Carolina, and Hawaii, as well as internationally in Canada. No-Li currently carries 22 oz bombers and draft, as well as 12 oz-bottle 4-packs.