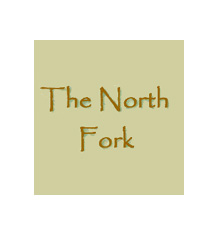 Worshiping at the Beer Shrine

North Fork Brewery in Deming, WA calls itself The Beer Shrine. What, you might ask, is a beer shrine? We were wondering the same thing so we stopped by on a Saturday afternoon to find out.

When traveling along Mt. Baker Highway, North Fork Brewery is hard to miss. Located approximately 25 minutes east of Bellingham, the brewery occupies an old roadhouse at a wide spot in the road. There is a sign hanging out front identifying it as a wedding chapel and beer shrine. This is a place familiar to skiers, mountain bikers, hikers and anyone else regularly traveling Mount Baker Highway; however, to us city folks it is a bit of a mystery.

Sandy and Vicki Savage are the proud proprietors of North Fork Brewery and Pizzeria, which opened its doors in 1997. “My husband worked for years as a brewer and brewery designer. He did a lot of in-kind work and collected all sorts of equipment along the way,” Vicki explains. “When we opened up this place, he pieced a bunch of it together into a brewery.”

Earlier this year, North Fork installed a solar array. The system is one of the largest solar installations in Whatcom County to date. It was reported to be the first private solar project in the county expected to produce enough energy to offset the company’s annual energy bill.

Sandy Savage’s resume includes a stint as head brewer at Triple Rock Brewery in Berkeley, CA. It is not surprising that the people who run the beer shrine arrived here by way of northern California. If you visit the North Fork Brewery, you will meet Vicki, and when you do, you will know what I mean. Vicki not only makes you feel welcome, but she makes you feel like you are supposed to be there–as if you arrived at the shrine by divine providence. It takes all of five seconds to feel like you have known each other for years. She is that kind of person. Like the beer her husband brews, she is genuine and authentic.

Within the cozy walls of the Beer Shrine, Vicki runs the show. She welcomes customers, serves pizza, and describes the North Fork beer philosophy with the same infectious enthusiasm. You get the impression that she could do all of this while juggling.

“We produce real, traditional British-style ales. A lot of breweries make beers that are really heavily hopped but we shoot for balance. We tend to make beers that are not as strong as what a lot of the other breweries are making. We’re a roadhouse, so we have to think about that, too,” she says as she points out the window to the nearby highway.

With hot pizzas to serve and guests to welcome, Vicki wanders off. She passes by our table a moment later with two pizzas. “Like they do in Britain,” she adds midstride. It takes a second for us to connect that statement with the previous conversation. 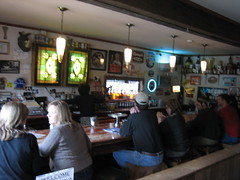 She returns after seating the group and does not miss a beat. “We started doing weddings here in the pub and also out in the yard. We’ve done over one-hundred ceremonies.” Vicki tells us that she is ordained and can perform the nuptials herself. Somehow, we are not surprised.

The beer is true to style. Vicki’s description is spot on. These beers taste more like jolly old England than they do hoppy old Washington. Even the IPA is balanced, a somewhat unexpected surprise considering the average IBUs associated with the IPAs brewed around here. It is just slightly floral on the nose and respectfully bitter on the palate. 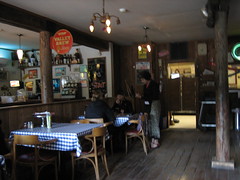 When we were there, the beer list included Red Eye Amber, IPA, strong Scottish ale, dry stout, and a barley wine. The beer menu included one notable exception to the British theme–a Bavarian Hefeweizen. We sampled all of the beers. The IPA and the Red Eye Amber were our favorites. The Hefe was also very impressive. All of the beers are crisp and fresh. Be sure to try the ESB: it is outstanding.

If you like barleywine, this is your spot. You’re likely to find it here all year long.

When you look at the brewhouse, which is easily visible from the pub, you will understand why you so rarely see North Fork beers away from the Beer Shrine. The brewery produces beer 3.5 barrels at a time. They describe it as “the smallest brewery on the west coast.” That may or may not be true, but we will accept the description regardless.

The food was great. Plan to eat when you visit. Along with a very good pizza (topped with pineapple and smoked salmon), we had an amazing salad that was packed with all sorts of garden-fresh goodies and then dressed with an amazing Green Goddess dressing.

The North Fork Brewery and Pizzeria is cozy and inviting. The brewery and the kitchen are powered by nothing but positive energy, solar panels, and good vibes. Make your pilgrimage to the beer shrine. Tell them that we sent you and Vicki will treat you right. We are old friends. At least it feels that way.

GETTING THERE –
Take I-5 to Bellingham.
Take Exit 255 (Mt. Baker Highway, Hwy 542).
Go east for 17 miles (about 25 minutes).
North Fork Brewery is about 4 miles past the Nooksack Casino.
http://www.northforkbrewery.com/

It must be something in the water - Olympia's Well 80 Brewhouse