Festivities kickoff on Friday night with cake and live music, and then the party continues the next day with beer specials, swag drawings, and more. Here’s the information straight from North Jetty Brewing:

North Jetty Brewing invites you to celebrate with us on the 15th and 16th of April! We are celebrating our 2nd Anniversary of our tap room or as we like to call it “The Jetty”. In two short years we have gone from a 1.5 barrel system to a 10 barrel system, are distributed in 11 counties in Washington and Oregon, started bottling, have won some cool awards, increased our capacity 50% by adding our newest addition of a 20 barrel fermenter in March, and will have a new brewer joining us in May. We couldn’t have done this without the support of this great community and beer lovers around Washington and Oregon. We want to spend the weekend thanking everyone for helping us be successful at something we love to do! 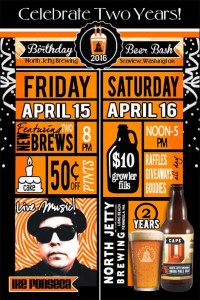 Festivities kick off Friday night at 8:00 pm with birthday cake and music from Ike Fonseca of Portland. He was brought up on many different genres and influences and has been able to create a sound for himself that appeals to a wide variety of fans. The celebration will continue Saturday with drawings, goodies, beer specials, and STREETSIDE TACO 2.0 specials.

We will be releasing two one-off beers during this event. The first is 423 Dampfbier in celebration of the 500th anniversary of Reinheitsgebot, the German Purity Law. Dampfbier translates to Steam Beer. This beer is a malty, lightly hopped, golden beer similar to Hefeweizen with little bitterness.

We are also releasing Big Boots Rhuberry Blonde made with 50 pounds of strawberries, 50 pounds of rhubarb, lemon zest and dry hopped with Mosaic hops. This beer was brewed on March 5th in honor of International Women’s Collaboration Brew Day. Pink Boots Society chapters, members, breweries and supporters around the world brewed beers in benefit of the Pink Boots Society. A portion of the proceeds will go towards women’s scholarships in the brewing industry. North Jetty Brewing would like to thank everyone who came out to brew, with special thanks to Fort George Brewery, River Mile 38 Brewing Co., and North 47 Brewing Co., Country Malt Group, Imperial Organic Yeast, and Graziano Foodservice Inc. for your participation and donations.

Reuben's Brews teams up with Jack's BBQ for an online beer dinner
No-Li Brewhouse announces big expansion plans in Spokane
To mask or not to mask? and other important questions needing answers