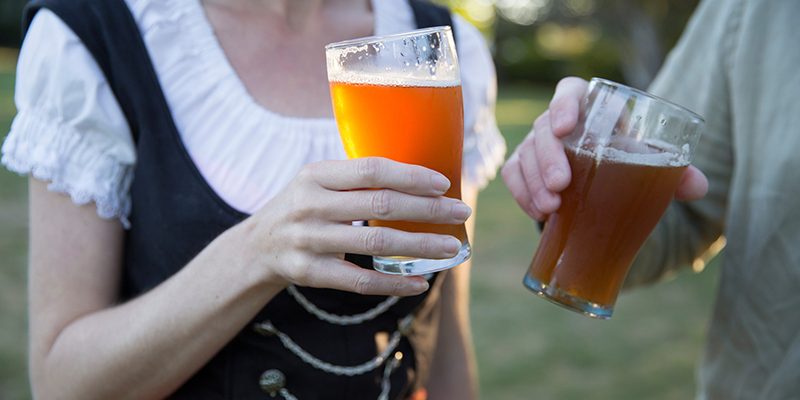 It’s Oktoberfest time around the world, and our local breweries and pubs are getting their lederhosen, dirndls and beers ready. So many lagers, so little time!  Here’s the round up. As always, I’m sure we missed a few so drop us a comment here or on Facebook!  (Top image courtesy of McMenamins.)

This might be the first Oktoberfest of the season? In partnership with Flatstick Pub. Live music. 1901 Western Ave, Seattle.

I’m not sure whether to put this under our Fresh Hop beer round-up or our Oktoberfest beer round up, so we will put it in both posts. The clever folks at Perry Street Brewing in Spokane combined the two reasons to celebrate fall beer into one event. Two days full of mugs, food, and specially-released beer…all things Oktoberfest, beer-hall style. The last 5 years they have SOLD OUT of specialty glassware, so they are pre-selling them again early, starting this Thursday, September 12th. Stop by the taproom and reserve yours.  1025 S Perry St, Spokane. Lots more info on their Facebook event page.

Oktoberfest is almost here and this year they are kicking it off with the oldest brewery in the world, Weihenstephan! Every Weihenstephan that you buy gets you a chance to win great raffle prizes, and everyone who comes in their Dirndl or Lederhosen gets $1 off Biers all night. Let’s get this party started right! 3407 California Ave SW, Seattle.

Join Four Generals Brewing (blog sponsor) in Downtown Renton for the release of their Modern Fest Bier during our First Annual Oktoberfest celebration in the tasting room at 229 Wells Ave S. September 20th and 21st. This is a delicious lighter Fest Bier in the style of breweries just outside of Munich. Featuring Hallertauer Mittelfrueh hops, this Bier comes in at 5.9 ABV and 30 IBU. They will also have a limited amount of Gose and WBA Gold Medal Märzen on tap. Wear a Dirndl or Lederhosen to the event and get $1.00 off your first pint of any of our German Style Bier. Also starting today all of their German Style Bier will be served in the new .5 L mugs for the same price as a pint!

Friday and Saturday, September 20th and 21st, 2 to 9 pm.
Oktoberfest at Airways Brewing

Oktoberfest at Airways starts on Friday, September 20th and continues through Saturday, the 21st. Featuring German food specials at The Bistro & Beer Garden,  live music with The Bonnie Birch Bavarian Band Friday night at The Tap Room & Brewery, their 2019 Festbier with wooden barrel tappings Friday evening and Saturday afternoon and limited-edition Festbier Cans. Plus, as a special bonus, Alex’s German mom will be cooking up some of her family recipes in The Bistro & Beer Garden kitchen. More info on their Facebook event page.
Bistro and Beer Garden: 320 W Harrison St, Kent.
Tap Room and Brewery: 8611 S 212th St, Kent.

Have you checked out this newish White Center brewery yet? Now might be the time to get there. Ceremonial Tappings of our Festbier, live music, traditional games, and German inspired food from onsite permanent food truck, Das Wagon. Each day they will host a Masskrugstemmen (Beer Stein-holding Competition) where the winner gets a $50 gift card. All ages. 9832 14th Ave SW, Seattle. Check their Facebook event for the extensive schedule of events.

Celebrate the start of Oktoberfest in Munich. Tapping a cask-conditioned version of Oktoberfest (Marzen style lager) at noon along with the regular version on tap. Commemorative 1 Liter Maß Steins will be available for purchase. 232 Division St NW, Olympia.

So many events at both locations. Highlights:

At both locations, kids welcome until 10 p.m. and can make their own paper Lebkuchenherzen heart cookies with Rhein Haus’ Oktoberfest craft kits.

Nothing signals Autumn is upon us (well, at least in the beer industry) as the arrival of Oktoberfest. As with all things Geaux, they will be celebrating the season in their own unique way. They’ll have a collaboration fest beer with Matchless Brewing on tap as well as andouille and boudin “brats”. At 6pm, enjoy live music with the Swingin’ Voices jazz band. 425 E Main St, Auburn.

To get into the spirit, No Boat is throwing a 3rd Oktoberfest of their own. Expect their Festbier release,  special 1L No Boat German Tankard glass release, German-style food from Swift and Savory and more. 35214 SE Center Street #2, Snoqualmie. Details on their Facebook event page.

Saturday, September 28th and October 5th, 3 to 9 p.m.
Oktoberfest Part I and II at Dreadnought Brewing

Oktoberfest fun over 2 weekends! Oktoberfest in Monroe! Dreadnought is hosting the autumn festival with a couple of our favorite breweries, with beers from Crucible Brewing – Woodinville Forge, Haywire Brewing Co., At Large Brewing, Scrappy Punk Brewing and, of course, a special Oktoberfest beer from Dreadnought. Food will be available and music will be pumping. Your ticket includes admission, a commemorative mug, your first beer and a bratwurst. 16726 146th St SE #153, Monroe. More info on their Facebook event page.

Join Peddler Brewing in Ballard as they celebrate all things Oktoberfest, Pacific Northwest style. They’ve got a little something for everyone to start the harvest season off right. Food and drink specials plus Oktoberfest-themed contests all day! Doggos, kiddos and costumes welcome. 1514 NW Leary Way, Seattle. Facebook event page.

Join Rhein Haus Seattle and Tacoma for an Oktoberfest unlike any other. Teams of four will compete to finish four signature Rhein Haus dishes, each washed down with a half-liter of Rhein Haus lager brewed by Bayern Brewing. Along with the championship bragging rights, the team with the fastest time will win the grand prize of a $250 donation to a charity of their choice, a $50 Rhein Haus gift card and a commemorative Rhein Haus Oktoberfest t-shirt for each team member. To participate, sign up here for Rhein Haus Seattle and here for Rhein Haus Tacoma. The entry fee is $25 per team, which will be donated to benefit Northwest Harvest.

Multiple venues, German beer and food, processions, keg tappings, live music all day and night. At this point if you don’t have a hotel you need to plan on a designated driver.  Ticket info here.

Time to get tickets for Winter Beer Festival
Kegger for Koalas - fundraiser in Edmonds on February 13th
Win tickets to Belgian Fest, happening at Seattle Center on Jan. 25th