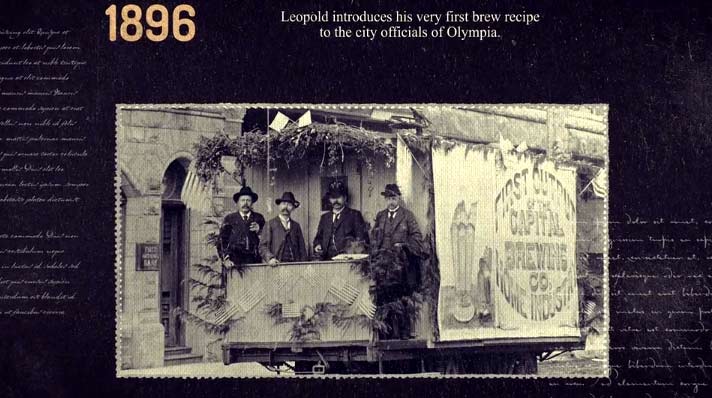 Leopold Schmidt founded the brewery that would become Olympia Brewery in 1896, reportedly because he recognized the quality of the water springing from the artesian wells that lay deep beneath the town. (Historical factoid: it was originally named Capital Brewing.) Olympia Beer grew into an iconic brand recognized across the nation and beyond. On Saturday, July 21, Well 80 Brewhouse in Olympia taps into a very special batch of beer: Leopold’s #1 Lager, a recreation of the first beer Leopold Schmidt brewed at his brewery more than 120 years ago.

On Sunday, July 21, at 2:00 p.m. a horse-drawn carriage will deliver a wooden keg filled with the newly brewed historical beer to Well 80 Brewhouse, completing a one-hour journey across town from the Schmidt House in Tumwater. Once the keg arrives, a Leopold Schmidt impersonator will perform the ceremonial tapping of the keg.

Leopold’s #1 Lager | A Taste of History from Flowstate on Vimeo.

The beer was created by Paul Pearson, the brewmaster at Well 80 Brewhouse, and Paul Knight, a brewmaster at Olympia Brewing Company from 1974-1997. The two used Leopold Schmidt’s handwritten notes (translated from German to English) to create a 20-barrel batch of the beer. Reportedly, the original beer was known for its heavy flavor and strong aroma.

#Repost @onpublicrelations with @get_repost ・・・ In 1896, it was Olympia Brewery Founder Leopold Schmidt who recognized the pure, artesian spring water from Tumwater Falls. The water is said to have been a key component in what became one of the Northwest’s most iconic brands, and the secret to Olympia beer today. . . . . . Olympia’s recently opened @well80brewhouse  which sits on one of the artesian wells, will launch “Leopold’s #1 Lager,” a scale version of Leopold’s first batch of beer from his original brewery in 1896. Brew masters Paul Knight and Paul Pearson have used Leopold’s handwritten notes (with the help of a translator) to create twenty barrels (forty kegs) of this iconic brew, known for its heavy flavor and strong aroma. Celebrate the release on Sunday, July 21 at the @lakefair with a horse-drawn carriage delivery, live brass band, Leopold impersonator and charitable auction. A horse drawn carriage with the first keg will depart the Schmidt House at 1:00 then tapping will take place at 2pm at the Well 80 Brewhouse. For every pint of Leopold’s #1 Lager sold, Well 80 will donate $1 to the @olympiatumwaterfoundation

For every pint of Leopold’s #1 Lager sold, Well 80 Brewhouse will donate $1 to the Olympia-Tumwater Foundation. Other items will be available for auction, including a 1910 piano with the “It’s the Water” insignia.