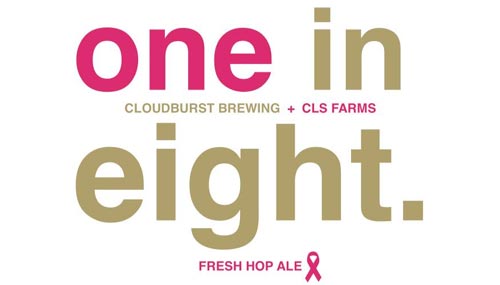 One in eight women will get a breast cancer diagnosis in their lifetime. Pretty scary number, eh? Given such a staggering statistic, it is easy to believe that virtually everyone has been touched, directly or indirectly, by the disease. The folks at Cloudburst Brewing are among those ranks. So too are the folks at CLS Farms, a hop grower in Moxee, Washington.

Cloudburst Brewing created a fresh hop beer with hops from CLS Farms to honor the women that battle breast cancer. Here’s the story of One in Eight, the first of eight fresh hop brews Cloudburst is creating this year.

“Our first big WET HOP beer drops this week,” said Cloudburst Brewing on Facebook. “The ritual of brewing wet hop beers is an inherently personal experience between brewer and farmer, and every year, the bonds between them grow stronger. One in Eight is not only our first of eight wet hop beers we’ll be releasing here, it’s also the number of how many women will be diagnosed with breast cancer in their lifetime.”

“Both CLS Farms and our brewery have had personal experiences with the fight against breast cancer, and we wanted to make this beer, loaded with 21 lbs. per barrel of Centennial hops, count—so we’ll be donating $1 of every pint sold in the tasting room to the Wellness House Yakima, and CLS will be making a donation on every keg we sell wholesale.”

So head down to Cloudburst Brewing and try the first of their eight fresh hop beers knowing that you’re helping a very worthwhile cause.

If you’re in Yakima, on Monday, September 17th The Sports Center is hosting an event. All of the proceeds from the beer will be donated to Wellness House of Yakima. Facebook event page.