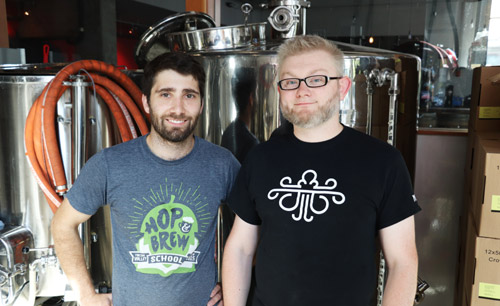 Cody Morris took the local beer world by storm nearly a decade ago when he opened Epic Ales in Seattle’s SoDo neighborhood and started serving his wildly creative beers. Seriously, his beers challenged people to rethink the nature of beer, sometimes including ingredients like beets, mushrooms, szechuan peppercorns, and I don’t remember what else. [Pictured above Cody Morris (right) with Carey Dixon, brewmaster at Magnuson Cafe and Brewery.]

Creative beers, yes, but mostly they were just tasty. His beers paired exceptionally well with food, like the food created by chef Travis Kukull at the Epic Ales Gastropod on First Avenue South.

Fast-forward to 2015 and Cody moved up to a bigger brewing system, shutting down Epic Ales and the Gastropod when Dexter Brewhouse and Mollusk Brewing became a reality. Many local foodies and beer geeks shed a tear over the closing of the cozy confines of Gastropod. As we recently reported, Dexter Brewhouse and Mollusk Brewing shut the doors for good on February 1st. The company will continue to brew at its other location, Magnuson Cafe and Brewery.

So how did this impact Cody Morris and what’s does he have planned next?

“I had the choice to stay on board but the direction the new ownership wants to take the brewing program isn’t what I want to spend my time doing,” explains Cody, expressing no ill-will at the parting. “Also the cost of living in Seattle made it increasingly difficult to live a full life on a brewer’s salary.”

As Cody pondered his future, the town of Shelton, Washington suffered as one of the very few dark spots on the map of Washington breweries. A town of that size in the Puget Sound area that does not have a brewery or brewpub is a rarity to say the least. Grove Street Brewing gave it a shot a few years back, opening its doors in Shelton back in 2009, but for whatever reason that brewery failed to gain momentum and closed several years ago, leaving Shelton without a brewery to call its own.

(I should mention Keyhole Valley Brewing, located near Shelton. That brewery, located on a farm, does not have a taproom, though it will be open on March 2nd for Washington Beer Open House.)

“I have a long connection to the peninsula –Mason county specifically–and wanted a fresh start in an under-served community,” says Cody. “I am in the process of buying an old funeral home in downtown Shelton and am getting all the financing set up. My hope is to open the doors in September.”

Shelton Brewing Company will create a collection of core beers, available on draft for the immediate area: beers like IPAs, wheat beers, red ales, and lagers. Those beer will pour at the brewery’s tasting room alongside seasonal one-off beers. They’ll also produce sours beers and farmhouse-style beers, along with barrel-aged and mixed-fermentation beers. The taproom will have a crowler machine as well as a selection of bottled beers, which they’ll wholesale to local shops, including shops in the Seattle area.

The plan is to forego a kitchen, but the tasting room will offer a selection of locally produced packaged foods, which customers can enjoy on site or to go. Also, food trucks are part of the plan and guests will be allowed to bring in food from home or other local businesses.

Cody adds, “I plan to do a ton of collaborations with brewers from all over. Collabs have always been my favorite development in the brewing scene and I want to embrace it. Though Shelton is far away [from other breweries], our building includes a four-bedroom apartment, so we’ll have plenty of room for a brew team to spend the night.”

We will keep you posted as the Shelton Brewing Company plan comes to fruition.